Why the U.K.'s Brexit Party Is In Some Trouble Over Merch

The Brexit Party in the U.K. is anything but subtle. Its leader, Nigel Farage, has thrown himself in front of every microphone or camera with a red light on to espouse his beliefs of U.K. independence from the EU and dependence on international relations.

That'd be all well and good if it didn't come out that the same party hawking the idea of "British jobs for British people" was also hawking merchandise made in Asia—a non-British place full of likely non-British workers.

The Mirror reported that a Brexit Party T-shirt and hoodie, running for £9 and £19.99, respectively, were made in Bangladesh, a country notorious for its questionable working conditions and low manufacturing wages. 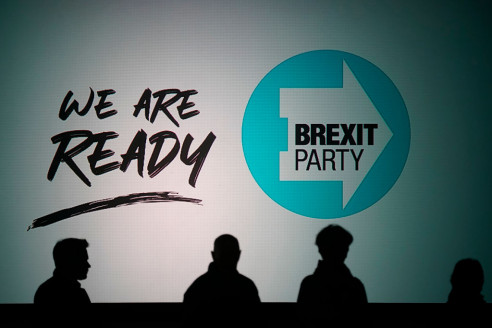 "Brexit Party fantasies of returning to the 1950s appear to be reflected in the way they treat foreign workers," Liberal Democrat Member of Parliament Chris Davies said, according to the Mirror. "Vulnerable workers are never on the minds of the Brexit Party, either at home or abroad."

It isn't the first time a Farage-backed company was found out for hypocrisy The Leave.EU campaign site, the web store for the pro-"leave" side of the Brexit referendum (of which Farage was a major player), was selling a £20 T-shirt made in Bangladesh.

The ultimate irony here is that Bangladesh has been growing its foothold in the E.U., pushing to overtake China as the top apparel importer to the EU.

Reporters found that a Brexit Party tea towel and teddy bear were made in the U.K., but other items, such as scarves, ties and socks, did not list their countries of origin.

"Our button badges, rear window stickers, tea towels, travel mugs and scarves are all manufactured in the U.K.," the Brexit Party said. "We are committed to international free trade, we don't want to be stuck behind a protectionist trade wall. The Lib Dems are little Europeans. Despite this, much of their own merchandise comes from overseas, notably the Far East."

You'll notice that the inflammatory "what-about-ism" dig noticeably omitted apparel from its list of items made in the U.K., despite them being for sale on the site. The Brexit Party store also lists plenty of items outside of the ones listed by the party as made in the U.K., implying that they could be sourced abroad along with the T-shirt and hoodie.

It's also worth noting that the Brexit Party technically is not a traditional political party, as it is registered as a company rather than a political party. Also, anyone, regardless of where they're geographically located on the globe, can join with a £25 PayPal donation. A donation of £100 a month gets you VIP access to events and a "bespoke welcome gift."

No word on whether that gift came from the U.K. or not.

Sourcing abroad is not the issue here. The Brexit Party as a company would hardly be in the minority for selling apparel made overseas. That's the standard. The problem lies in its message—usually delivered with some indignation at "globalists" and "Europeans"—being purely based around U.K. economic independence and creating jobs for British people on the island, yet sourcing its products from workers nowhere near the U.K.