U.S., Mexico Reach Sugar Trade Deal And No One Likes It 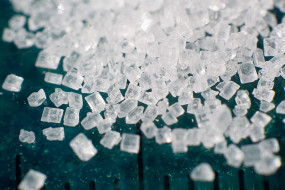 The U.S. and Mexico reached a deal regarding sugar imports to the U.S. Mexico feels it made necessary (yet substantial) concessions, and U.S. companies feel like it didn't do enough. (Image via Lauri Andler/Wikimedia Commons)

After Mexican officials put a halt on sugar exports to the U.S. in March, Mexico and the U.S. came to an agreement last week regarding sugar trade. The deal effectively cuts exports of refined sugar from Mexico, after American sugar refiners complained that Mexico was using unfair trade practices to push refined sugar into the U.S. market, while simultaneously limiting raw sugar it exported to U.S. refineries.

"We have gotten the Mexican side to agree to nearly every request made by the U.S. sugar industry to address flaws in the current system and ensure fair treatment of American sugar growers and refiners," U.S. Commerce Secretary Wilbur Ross said at a news conference, according to The New York Times. "Unfortunately, despite all of these gains, the U.S. sugar industry has said it is unable to support the new agreement, but we remain hopeful that further progress can be made during the drafting process."

The reason the U.S. sugar industry was unhappy is this: According to the American Sugar Alliance, which represents U.S. sugar refiners, the new deal contains a loophole that would let Mexico continue what the alliance called "unfair trade practices." In 2013, Mexico doubled its sugar exports thanks to an unusually large harvest. As a result, the U.S. Commerce Department imposed duties up to 80 percent, and Mexico accepted limits on price and volume of exports in 2014 to avoid the costly duties.

This new deal keeps the 2014 deal in place, but puts a limit on how much refined sugar Mexico can send to the U.S. To be exact, that number is down from 53 percent to 30 percent of its exports. It also lowers the purity threshold for when Mexican sugar can be sold as refined sugar.

Before, the U.S. sugar industry was protected by a price guarantee that included import quotas and other limitations to hold the industry in place. But, as part of NAFTA, Mexico has had unrestricted access to the U.S. sugar market since 2008.

This negotiation takes place during a time where the U.S.'s stance on trade with Mexico (along with Canada as part of NAFTA) is uncertain. Eswar Prasad, a trade expert at Cornell University, told The New York Times that the U.S.'s desire to renegotiate NAFTA may have paved the way for the U.S. to ink a deal in which Mexico made so many concessions.

"Conducting the negotiation on sugar trade against the background of a broader renegotiation of NAFTA gave the United States significant bargaining leverage," Prasad said. "A ratcheting-up of trade tensions could well have poisoned the broader negotiations, an outcome that Mexico clearly wanted to avoid."

"We definitely gave up a lot," Juan Cortina Gallardo, president of Mexico's sugar chamber, said, according to The New York Times. "Besides it making sense for the Mexican industry to sign the agreements, it also makes sense for Mexico to finish the agreement in a successful manner because of NAFTA."

Mexican officials added that the deal still allows the country to export the same amount of sugar to the U.S., and Mexican cane growers will continue to receive the same compensation as before.

Domestic Dissatisfaction
While the sugar industry claimed that the deal didn't do enough to regulate Mexican sugar exports, one major player in the U.S. candy world has another gripe.

Spangler Candy Co. is the last U.S. manufacturer of candy canes. It also produces Dum Dum lollipops. Kirk Vashaw, CEO of Spangler Candy Co., said that the new minimum price for Mexican sugar will cause his cost of production to skyrocket.

"To be honest, I'm just very disappointed that the Trump administration didn't do more to level the playing field, which is something they promised over and over again to do for the American worker," Vashaw told Reuters. "This was an opportunity to do that, and they didn't."

A spokesperson from Hershey's told Reuters that the company was aware of the possibility that the deal would increase sugar prices and, along with Mondelez International Inc., directed the news outlet to a statement from the Sweeteners Users Association, which described the new agreement as a "stealth price increase."

"This is putting America second,"  said, Jeanne Shaheen, a senator from New Hampshire, the home state of Lindt & Sprüngli chocolate makers. "It's a bad deal for American families and businesses that will raise costs for consumers and threaten jobs in sugar-using industries."

The cost of importing has caused Vashaw to open a plant in Juarez, Mexico, just over the border from El Paso, Texas.

"If it was all about money, we'd do it all in Mexico," Vashaw told Retuers. "When your main cost driver just went up 8 percent and in Mexico it didn't go up at all, it just makes any foreign confectionary supplier more cost competitive. That's why a lot of companies moved out of the United States."