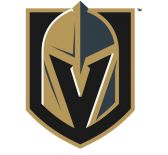 The U.S. Patent and Trademark Office denied the Vegas Golden Knights' request for a trademark. (Image via Twitter)

When we wrote that NHL deputy commissioner Bill Daly didn't expect an issue with the league's new expansion team's name, we should have knocked on wood, because, well, there's an issue.

Yesterday, the office cited a "likelihood of confusion" with the Golden Knights of The College of Saint Rose in Albany, N.Y., according to ESPN.

But, just like before, the team is saying that it shouldn't matter since other teams share names.

"There are countless examples of college sports teams and professional sports teams with coexisting names, including Vegas Golden Knights and Clarkson Golden Knights, UCLA Bruins and Boston Bruins, [University] of Miami Hurricanes and Carolina Hurricanes, etc.," the team said in a statement, according to ESPN. "We will plan on making these arguments and others in our detailed written response."

Once again, though, Daly isn't sounding any alarms or calling for the immediate destruction of Golden Knights merchandise.

"We consider this a routine matter and it is not our intention to reconsider the name or logo of this franchise," Daly said to ESPN. "We fully intend to proceed as originally planned, relying on our common law trademark rights as well as our state trademark registrations while we work through the process of addressing the question raised in the federal applications."

The team has six months to respond to the trademark denial.

Just in case, team owner Bill Foley also filed for trademarks for two other possible team names: Silver Knights and Desert Knights. So, worst case scenario, fans can just cross out "Golden" and write in the preferred adjective once it's all settled.

After all, a Cleveland Browns fan had been doing that for the team's rotating cast of quarterbacks for a while now.