There has been a bizarre trade battle waging between the U.S. and Rwanda for the past few years. In 2016, Rwanda made the decision to raise tariffs on used clothing and footwear imports from the U.S. in order to stimulate its domestic manufacturing. As a result, the U.S. threatened to remove Rwanda's privilege to export duty-free clothing to the U.S. Yesterday, the U.S. announced it would be making good on that promise, according to CNN.

While the suspension will not apply to other duty-free benefits Rwanda receives under the African Growth and Opportunity Act (AGOA), it will affect 3 percent of its total exports to the U.S., according to the U.S. Trade Representative's office. That totals about $1.5 million in clothes. 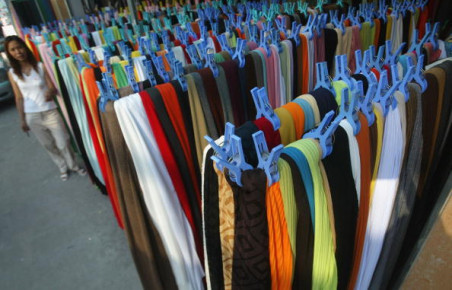 "We regret this outcome and hope it is temporary," Deputy U.S. Trade Representative C.J. Mahoney said in a statement. "The president's action today is measured and proportional."

"The president's action does not affect the vast majority of Rwanda's exports to the United States," Mahoney added. "We look forward to working with Rwanda to resolve this issue so that benefits in the apparel sector may be restored."

Critics of the new regulations have said the president is waging a trade war over a trivial amount of goods, and that it is an unnecessary symbolic gesture. We will see if this new regulation is truly temporary, and whether or not Rwanda chooses to comply.