According to the American Trucking Associations (ATA), there's a shortage of approximately 50,000 truck drivers in the U.S. This shortage is contributing to shipping issues for retailers and consumers, and it's seeping into the promotional products space, too.

As a result, Amazon has had to raise the price of its Prime membership from $99 to $119 a year to offset increased shipping costs, according to CNBC.

Bob Costello, chief economist at the ATA, chalked the shortage up to "a demographics problem," citing an aging workforce and lack of female drivers, specifically.

Curtis Grotting, vice president of logistics for the Magnet Group, said the supplier is well aware of the trucking shortage in the U.S.

"The primary issue has been the congressionally mandated rule requiring all drivers to follow the new Electronic Logging Devices (ELD or Electronic Log) in all truck equipment," Grotting told Promo Marketing. "This is a transition from drivers being able to manually fill out their logbooks (allowing for drivers to have more flexibility in cheating the system), to an electronic device that tracks and ultimately will fine a driver or the company he works for if they are not adhering to the driver safety standards."

Grotting added that, as a result of this shift, drive times are increasing and veteran truck drivers are leaving the industry to avoid the fines and charges. 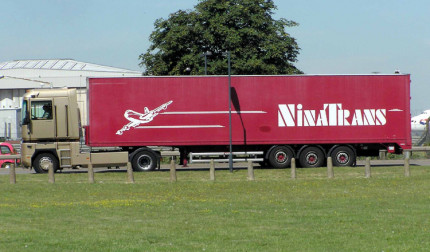 The American Trucking Associations estimate that the U.S. needs to add almost 1 million truck drivers within the next 10 years. | Credit: Wikimedia Commons by Arpingstone

In the promotional products industry, Grotting said that suppliers are working to speed up production to allow more time for shipments. He also mentioned shifting some product volume to less-than-truckload, aka LTL, shipping services, which have designated transit times but smaller shipping volumes. In some cases, he said, suppliers move their products to smaller parcel carriers, such as UPS or FedEx.

The exodus of aging drivers and those who want to skirt extra charges has fueled the debate for self-driving trucks, a pet project of eccentric billionaire Elon Musk.

His company, Tesla, is currently working to develop a fully electric semi truck. According to CNBC, Goldman Sachs estimated that self-driving cars could take over more than 25,000 jobs per month once fully instituted. But that seems to be a long way off, at least according to Costello, who told CNBC that that problem is "decades away."

In the meantime, the ATA estimated that the U.S. will need to add 898,000 more drivers over the next 10 years to keep up with demand and growth.

While that window of time seems to be too soon for self-driving trucks to ease the tension, companies will have to offset shipping costs as much as possible to account for the driver shortage.