We find ourselves only a day away from the commencement of the National Football League’s postseason slate, with eight teams set to take to the gridiron this weekend in wild card round action. Each tilt has interesting plotlines, but one would be hard-pressed to top the sentimental elements of the Jacksonville Jaguars/Buffalo Bills matchup, with the former returning to the playoffs after a 10-year drought and the latter vying for the Lombardi Trophy after an 18-campaign hiatus. The Jaguars will host Sunday’s 1:05 duel at EverBank Field, and along with a fervent fan base, the AFC South division victors will have another prominent backer, Uber Eats, which yesterday agreed to help the Florida club’s supporters to load up on merchandise.

Ahead of the 2017 season, Uber, under its inaugural chief brand officer, Bozoma Saint John, launched its initial brand campaign with NFL franchises, running regional advertisements over the 17-week march to the postseason tournament. Along with that endeavor, the San Francisco-based company softened the sting of what would become a playoff-free year for the Seattle Seahawks by delivering Christmas-centric goods to their now-disappointed fans, who just might shout “Humbug” if they catch any of the six NFC postseason participants in action. 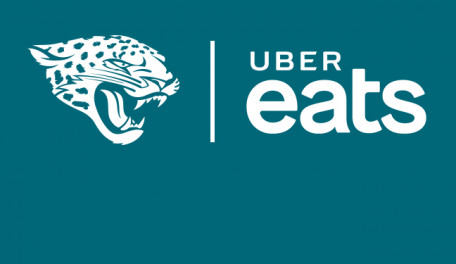 With regards to the Jaguars, who will be on the prowl for the sixth playoff win in their 22-year history, its three-year-old Uber Eats platform will supply T-shirts and hats throughout the squad's playoff run when end-users purchase products through their smartphones, a commercial option that Steve Ziff, Jacksonville’s vice president of marketing and digital media, tabbed as an opportunity to add “a layer of convenience to the already-excellent shopping experience of our Jaguars Pro Shop, providing the product direct-to-door through an easy, one-stop transaction.” His estimation of the ease with which consumers can acquire desired tokens of their fandom and the novelty involved in satisfying them has many precedents, including Under Armour’s recent drone-reliant campaign and even Uber Eats’ 2017 merchandise partnership with McDonald’s. In other words, entities must realize that, to quote Tom Petty, the waiting is indeed the hardest part. Frankly, with the ever-increasing call to sate many customers’ demands for instant or, only slightly delayed, gratification, one might deem making them wait the most ill-advised component of a transaction.

Uber prides itself on being a time-conscious pacesetter, with Uber Eats being among its most lauded ventures. Its interactions with the NFL, with whom it has more than a dozen partnerships and for whom it serves as 17 clubs’ official ride-share company, figure to grow now that the agreement with the Jaguars marks an extension of its relationship with pigskin organizations beyond the regular season. That in itself could serve as inspiration to companies who are looking to foster more engaging connections and increase their reputations as industry figures who will go the whole nine yards to keep their clients and consumers happy.

Netflix Beat the U.S. Military to the 'Space Force' Trademark for Merchandise
Comments
The Top Lists