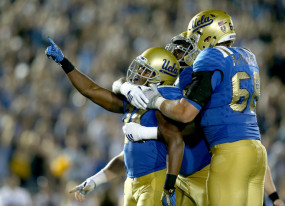 (Image via The New York Times)

This week, UCLA and Under Armour announced a $280 million sponsorship deal over 15 years, making it the largest college sponsorship ever, according to The New York Times.

However, the UCLA and Under Armour deal, commencing in July 2017, is the largest one so far.

UCLA has always been about challenging the status quo and breaking through barriers. Under Armour shares those core values. They are about more than simply making athletes look good. They constantly pursue innovation in order to make athletes better. At UCLA, making student-athletes better—athletically, academically and, most of all, personally—is everything to us. By valuing student-athlete success as a journey, not a destination, we have been able to win more NCAA championships than any other institution. Because Under Armour not only understands this, but embraces it, we are excited to embark upon this new journey together.

Kevin Plank, founder and CEO, Under Armour, said in the press release:

With 113 NCAA Championships, UCLA is the most decorated athletic program in history, the benchmark for excellence in performance. Under Armour’s commitment to growth through innovation and an unwavering mission to make all athletes better aligns seamlessly with UCLA and the pioneering figures that helped build the program, and we look forward to reaching new heights with the Bruins.

Such a groundbreaking deal signifies that college sports are a growing space for promotional products. More and more sports apparel companies are locking down NCAA teams, and the trend isn't going anywhere.

Under Armour quickly is becoming a dominating force in college merchandise deals. This is Under Armour's third sponsorship deal with a PAC-12 school, according to Forbes. Even the University of Cincinnati, a less prominent sports program, signed a $5 million deal with Under Armour this year.