Uh Oh, Beyoncé Might Have Messed Up With Latest Apparel Collection 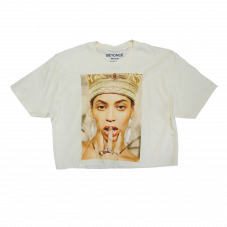 Most of the time, Beyoncé can do no wrong when it comes to her promotional merchandise. From her Valentine's Day collection to her Holiday collection, she's consistently proving that she is the queen of promotional apparel. But, it looks like Queen Bey hit a snag with her latest Nefertiti-inspired spring collection.

Beyoncé's latest collection features long sleeve tees, crop tops, hoodies and classic tees. The problem, however, is that all the products feature Beyoncé posing in a crown similar to the one that the Egyptian queen wore, and not everyone thinks she has the right to profit off Nefertiti. Once the apparel was unveiled last week, Egyptians took to Twitter to express their discontent.

If katy had done that all of fake woke stan twitter would be dragging her for “cultural appropriation” but when it comes to beyoncé... https://t.co/hnbxke9EfW

Beyonce the culture vulture is now trying to sell Nefertiti merchandise. What a rat pic.twitter.com/3pK6ltdNNZ

Many users pointed out that Bey is not guilty of cultural appropriation, but she is instead showing cultural appreciation. However, because Jay-Z sampled an Egyptian song without giving credit, some Egyptian fans are feeling like the duo are suggesting Egyptian art is less valuable than American art.