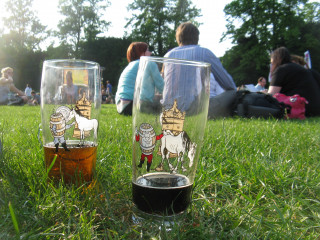 A study found that printed drinkware could contain dangerous concentrations of harmful chemicals, like lead and cadmium. | Credit: Wikimedia Commons by Shaggy359

A study released by the University of Plymouth in the U.K. found that decorated drinkware could contain potentially dangerous amounts of cadmium and lead.

Researchers at the university performed 197 tests on 72 new and second-hand drinkware products, including drinking glasses, tumblers, beer and wine glasses, and jars. The researchers found lead present in 139 cases and cadmium in 134, on the surface as well as the rims of some glasses. In some cases, the concentration of lead reached more than 1,000 times higher than the limit.

"The presence of hazardous elements in both the paint and glaze of decorated glassware has obvious implications for both human health and the environment," Dr. Andrew Turner, who led the study, said in a press release. "So, it was a real surprise to find such high levels of lead and cadmium, both on the outside of the glassware and around the rim. There are genuine health risks posed through ingesting such levels of the substance over a prolonged period, so this is clearly an issue that the international glassware industry needs to take action on a matter of urgency."

The amount of lead ranged from about 40 to 400,000 parts per million (ppm). Cadmium concentrations ranged from about 300 to 70,000 ppm. It's important to note here that the U.S. Office of Environmental Health Hazard Assessment indicates that lead concentration on external decoration of the lip area shouldn't surpass 200 ppm. For cadmium, that limit is 800 ppm.

The presence of cadmium in decorated glassware is startling—especially seeing how far over the limit the concentration is in some items—but it's not new. In 2010, McDonald's recalled 12 million promotional glasses for the movie "Shrek Forever After" when it discovered dangerous levels of cadmium in the paint. Despite the fact that McDonald's claimed that the glassware was evaluated by a third-party laboratory with CPSC accreditation, and was found to be compliant with federal and state regulations, the company recalled the products to err on the side of "an abundance of caution," per WebMD.

In 2014, a study found that 71 percent of university-themed products sold during the NCAA basketball tournament at major retailers contained one or more hazardous substances, such as arsenic, lead, bromine, chlorine, mercury and cadmium. More than one third of the products contained at least two of those chemicals, according to Environmental Leader.

The University of Plymouth study also indicated that hazardous elements used in decoration, like beer bottles, text and logos on egg cartons and the undersides of coasters, could make contact with food, creating a risk of contamination.

Turner noted that the Federation of European Screen Printers Association is looking to organic inks, rather than metallic ones, and that a number of newly-purchased products that included organic ink tested negative for lead and cadmium.

"Given that safer alternatives are available to the industry, the overall results of this study are both surprising and concerning," Turner said in the release. "Why are harmful or restricted elements still being employed so commonly to decorate contemporary glassware manufactured in China, the European Union and elsewhere? I believe consumers should be made aware of this, while retailers and the glass industry have the responsibility to eliminate toxic metals from decorated products."