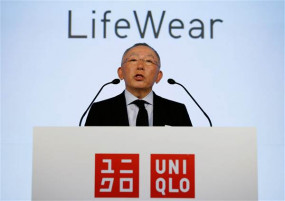 Tadashi Yanai, chairman and president of Fast Retailing Co., which owns Uniqlo, told Japanese newspaper The Asahi Shimbun he would act fast if forced to manufacture in the U.S.

"If I was directly told to do so, I will withdraw from the United States," Yanai told the Japanese paper.

At this stage, this is all hypothetical, since it's uncertain whether or not Trump's proposed measures will pass. However, Yanai maintains that it's impossible to make quality goods in the U.S. that are affordable.

"Anyone will think that it is an open-and-shut and impossible situation," Yanai told Asahi Shimbun. "If [manufacturing products in the U.S.] is not a good decision for consumers, it is meaningless to do business in the United States."

If the policy does not pass, Uniqlo has plans to open 20 to 30 new stores per year in the U.S.

So far, no other large-scale retailer has threatened to shutter U.S. stores if Trump's manufacturing measure passes. It will be interesting to see if any other retailer follows suit.