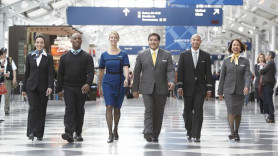 We all remember the American Airlines new uniform catastrophe—in part because it's still going on. More than 1,000 American Airlines employees came forward stating that their new uniforms caused headaches, rashes and a host of other complaints. Now, according to the Cincinnati Business Journal, United Airlines is trying its hand at a uniform refresh, and hopefully, the airline will avoid the same fate as American Airlines.

Either way, the reasoning behind United's new look is that employees complained that the original uniforms were not designed well and also were poor quality. According to the Cincinnati Business Journal, a United spokeswoman said the new uniforms are made of a more durable fabric, and the blazers feature more flexibility of movement. Additionally, the pockets have been reworked to reflect employees' requests.

So far, there have been no employee complaints about the new uniforms, but we will keep you updated if anything goes awry.