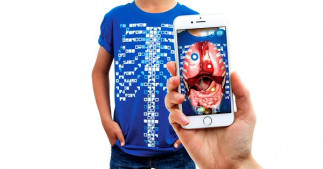 Virtuali-Tee has already proven a hit among consumers curious to know a bit more about their bodies. (Image via Twitter)

Your body is indeed a wonderland (there’s one for all of you John Mayer fans.), and as technological advances constantly help us to understand the inner workings of so many objects, the human form figures to receive its fair share of additional inspections so as to promote longevity. Promotional products peddlers yearn for their goods to prove comparably durable, and Curiscope appears poised to unite those mindsets through its Virtuali-Tee, a T-shirt that calls on a mobile device application to allow end-users to explore the infinite wonders of their finite frames.

The brainchild further validates that we are all far more than what meets the eye, with the United Kingdom-situated startup behind it using a combination of augmented and virtual reality. The former element of that duo has become quite a popular addition to consumers’ enjoyment of cherished products, yet nothing should be dearer to people than their health. Through a skeletally stylized shirt and the aforementioned free app, end-users can see inside their chest cavities, with Curiscope co-founder Ed Barton dubbing augmented reality as their interface and the virtual version as the means “to transport you somewhere else.”

Futurism finds itself giddy over the pairing, positing that the coupling could make the Virtuali-Tee device “fully immersive” and could prompt the creation of “a whole host of technologies that combine AR and VR.” Curiscope’s “How It Works” website section offers a thorough breakdown of how to maximize the allure of a product that overseers have christened “a magic lens into another world.” Wearable technology commodities, especially within the athletic world, have gained popularity in recent years, and the Virtuali-Tee, which Curiscope notes is on back order, could serve as a great school-based tool or as a reminder to older purchasers that they really are what they eat. (We are just jesting there. The shirt is not THAT truthful.) Thanks to the merger of curiosity and a QR code, consumers, while perhaps picking up some new vocabulary terms, can definitely confirm the adage that it’s what’s on the inside that counts.