With 100 teams competing in the NCAA Division I Men’s Basketball and National Invitation tournaments and what seems like one million bowl games making late December and early January an extra festive time, not earning a spot in the postseason as a major conference constituent can prove difficult to do. The hoops and gridiron squads at the University of Illinois, however, have become quite consistent at remaining irrelevant, so much so that alumnus Ted O’Malley decided to make their futility, along with outstanding state government bills and sizable tax hikes, the subject for an apparel line. The higher learning institution, though, is looking to teach the graduate one more lesson, as it is suing him over products that proclaim “Make Illinois Great Again,” contending that his brainchild violates two of its copyrights.

Having filed a trademark application in March 2017 to market “athletic apparel, namely, shirts, pants, jackets, footwear, hats and caps, [and] athletic uniforms,” O’Malley has found himself a defendant against his diploma issuer just over a year later due to a T-shirt bearing that slogan and an 11-year-old photo of a former mascot, Chief Illiniwek. The plaintiff filed a federal lawsuit the middle of last month, claiming dominion over the word “Illinois” and the image, with O’Malley, the seller of “a few shirts,” having aimed to “generate some passion and excitement amongst those people who care about the school to make it great again.” 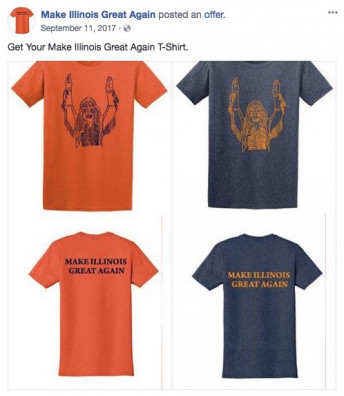 While the aforementioned athletic clubs could have served as enough inspiration for the peeved alumnus to envision fabric-based reactions to their futility, he also sought to make “a political statement,” so said lawyer Doug Johnson in responding to a November-filed notice of opposition by the university. Its objection, sent to the U.S. Patent and Trademark Office, asked the Trademark Trial and Appeal Board to agree that “Applicant intends to use the mark MAKE ILLINOIS GREAT AGAIN to directly trade on the substantial goodwill and recognition of the University’s ILLINOIS name” and that “Applicant’s MAKE ILLINOIS GREAT AGAIN mark is confusingly similar to the University’s ILLINOIS Marks and name.” Having stated that his client desired “to help spark winds of change” at the University of Illinois, the attorney had cause to celebrate in January and March, as the office’s appeal board dismissed the dispute during the first month, citing the school’s failure to address his motion to dismiss, and last month denied a motion to reconsider.

Exhibiting tenacity that appears akin to what O’Malley would like for the teams to display, the university decided to prolong the matter, with The News Gazette citing its recent run of success when acting as a legal adversary to trademark-seeking parties. However, as the publication also explains, Johnson believes that what he tabs an attempt “to stifle First Amendment rights” will leave the school pondering why it ever thought to challenge O’Malley, especially since it has not always reacted immediately to rid the market of Illiniwek merchandise.

“No one in their right mind would possibly believe that was something furnished by the University of Illinois,” Johnson said. “They are a state actor, and they don’t like the message.”

“I was just trying to parody ‘Make America Great Again’ with an Illinois version because I’m a passionate alumnus who believes there are some things to be improved at the university, especially a few sports teams,” his client said via a Gazette-directed text message, noting President Donald J. Trump’s victorious 2016 campaign rallying cry. “It wasn’t intended as anything other than that, and my lawyer told me it was fair use.”

Regardless of how much money the man has made off the garment, his alma mater fears confusion of his marks with theirs. But Johnson confided that it should be afraid of feeling foolish for thinking it can keep O’Malley from making his desired statement and, perhaps, a few bucks. We hold that higher learning locations are grooming enrollees to speak their minds, and this matter proves that schools do so because they themselves are quite adept at defending their own ideals. As this conflict is relatively young, expect the disgruntled defendant to claim even more that he has every right to rail against his home state and its leading school and for said site to seek a decisive victory, the sort of which has avoided the athletic programs toward whom O’Malley has directed some of his ire.