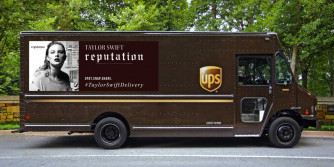 UPS had promotional trucks trek through Atlanta, Nashville and New York on Saturday, with many more cities to follow. (Image via Twitter)

Taylor Swift has been charming the American public since 2006, with the 11-year run helping the singer-songwriter amass a staggering net worth of $280 million. UPS was literally along for the initial ride as she catapulted to stardom, delivering her debut single, “Tim McGraw,” to national radio stations and assisting its ascent to No. 40 on the Billboard Hot 100. Many of the Pennsylvania product’s subsequent releases have hit the top of the charts, and she will certainly score her fifth No. 1 studio album shortly after “Reputation” drops Nov. 10. Renewing its commitment to her craft, the delivery company is promoting the work by placing its cover image on trucks and vans.

The decorative decision marks the inaugural time since its August 28, 1907 inception (happy birthday, by the way!) that UPS has used its vehicles to hawk an item. Given her amazing track record, it definitely chose well in teaming with Swift, a 10-time Grammy Award winner whose latest collection, 2014’s “1989,” has sold more than six million units in the U.S. Atlanta, Nashville and New York earned the honor of being the first cities to be summer harbingers of the fall disc on Saturday, two days after the unveiling of “Look What You Made Me Do,” the premier single from “Reputation.”

Others will follow and fans will surely spend the next two-plus months taking pictures of the vehicles, with use of #TaylorSwiftDelivery and @UPS enhancing their chances of receiving concert tickets. UPS is serving as the album’s official distributor and shipper, using a promotional video featuring Swift to cement the partnership.

“From our service providers who will be delivering fans’ wishes, to the logistics team who ‘tailor-made’ a new solution for album distribution, UPS is ready for our world-class performance,” Kate Gutman, UPS's chief sales and solutions officer, said via a company release.

Ahead of Saturday’s glimpses in the aforementioned cities, she and her contemporaries launched an opportunity that will certainly top the quest to capture the 27-year-old’s image via cellphones. Through the Taylor Swift Concert Flyaway Package, one fortunate devotee who pre-orders “Reputation” will claim four premium concert tickets, as well as round-trip airfare, a dinner for four, a two-night hotel stay and a makeover experience, among other gifts. “Hundreds of other prizes” will also be available, as UPS intends to announce winners every two weeks. The company hails “Reputation” as “the most anticipated delivery of the year,” so the holidays figure to be much more melodic for “Swifties” when they greet UPS drivers come November and December.

Taylor Swift is Trying to Trademark Her Birth Year

The Problem With Jim Beam (a Lesson for Promo Businesses)