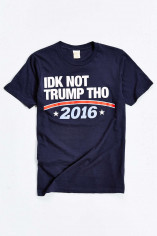 While most retail brands usually remain neutral on political debates, Urban Outfitters is capitalizing on the anti-Trump campaign. According to Bloomberg, the company is offering customers a variety of anti-Trump merchandise, including a T-shirt that reads, "IDK Not Trump Tho 2016." Urban Outfitters printed that same slogan on mugs and stickers, too.

This political move does not seem to be hurting the company. Instead, the T-shirts sold out online and have since been restocked. However, this risky move could alienate customers and agitate CEO Richard Hayne, who has donated to Republican candidates in the past. Not to mention, Urban Outfitters already has seen its fair share of controversy. The company has come under fire for tapestries reminiscent of concentration camp uniforms, and for the infamous Kent State sweatshirts.

What do you think of Urban Outfitters' latest merchandise? Let us know in the comments section below.