A Utah-based distributor is accused of presenting himself as a 3M representative and claiming to have millions of N95 masks for sale.

John Anthony Taylor, owner of Positive Marketing LLC and Wasatch Promotional Products in Park City, reportedly claimed to have access to one billion 3M N95 masks, which raised eyebrows since 3M didn’t even make a billion N95 masks in a month.

According to KJZZ, the FBI opened an investigation into Taylor and his business practices, and sent an undercover agent to try to buy the masks. Taylor responded to the informant’s request for proof that he had the masks with a fake purchase order from 3M.

Taylor is currently being charged with wire fraud in an indictment unsealed in Salt Lake City this week.

The indictment detailed a more complete list of Taylor’s illegal business practices. In addition to faking a relationship with 3M, he said he had recently focused his business Wasatch Promotional Products on selling masks, and had contracts with 3M for “a million, 30 million, 60 million [masks] for a couple different state governments.” He also claimed that he had previously closed a deal for 3 million N95 masks at a rate of $5.49 per mask. 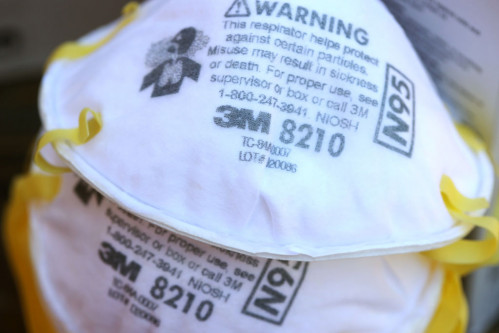 Utah distributor John Anthony Taylor claimed he was a 3M affiliate, and had access to millions of 3M N95 masks, which already are in short supply for medical professionals. | Credit: Getty Images by Justin Sullivan

According to the news report, Taylor was originally arrested back in May, and was arraigned on the indictment this week. Taylor issued a not guilty plea, and the trial is set for Nov. 23.

“Rooting out pandemic-related fraud is one of the highest priorities for the Department of Justice and my office,” U.S. Attorney John W. Huber said in a statement to KJZZ. “Experienced investigators and prosecutors are dedicated to holding accountable those who would use this challenging environment to pad their own pockets.”

Medical professionals have said basically since the beginning of the pandemic that N95 masks should be reserved primarily for medical professionals. The average citizen wearing a mask while out at places like the grocery store does not need the same level of protection as someone working directly with patients with COVID-19, or in an environment where they will frequently be exposed to respiratory droplets.

This is all besides the point, since Taylor never actually had the masks in the first place. That fraud not only harmed the victims of his fraud, it potentially could have damaged 3M's reputation if (when) he failed to deliver on his promises.

Health workers have been facing ongoing PPE shortages that have made their job so much more difficult and hazardous than it already is. The idea that one distributor had such an enormous stockpile would be ridiculous.

And even at a time where the world isn’t gripped by an unprecedented crisis, distributors and end-buyers need to be on the lookout for suspicious activity. Just yesterday we reported on a distributor who fell victim to a scam and lost out on thousands of dollars and hundreds of T-shirts, even when her initial instincts told her the situation was off and she took steps to protect herself.

If something feels too good to be true, it probably is.