With cost of living increases being a constant burden for people everywhere, it can be quite easy to lambaste local leaders when they consider ideas that could cause constituents to part with more of their dwindling resources. Sometimes, though, their concepts contain a call to put out money so as to build community pride. Vancouver stands as Canada’s most expensive place to live, but since it also wins regard for its aesthetics and amenities, City Councillor Andrea Reimer is hoping to garner more support for a motion whose implementation would find British Columbia’s most populous spot hawking branded merchandise. 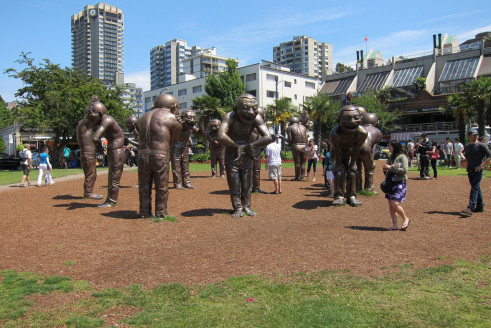 A news source has pondered whether Vancouver would look to market prints of the city's A-maze-ing Laughter statues. | Credit: Flickr by Stephen Rees

The politician, with support from Mayor Gregor Robertson, united with her peers today to consider the benefits of having a “cost neutral retail operation for Vancouver branded products and other items for which the City has licensing rights.”

The council session topic, which the powers that be dubbed “Celebrating Vancouver” in putting it up for debate, finds Reimer contending that the environs should make available to the general public items that typically exist only as “branded products for protocol gifts and special events.” As residents continually inquire about how to acquire said goods, including a City of Vancouver umbrella, she holds that selling them and other license-inclusive offerings would help her turf mimic favorably other cities that have ventured “to build community and civic pride” by branding products.

“Even if it didn’t [earn money] and was just revenue neutral, it would be worth it to be able to get items to people that they want to have to show their pride in Vancouver,” Reimer said through a Global News account of her brainchild, with the Vancouver Courier adding that she believes local artists and designers could come to profit from the concept should it succeed.

Council in session: starting with presentations from staff on public consultation for 2019-2022 Capital Plan and update on Supporting Small Business. Livestream https://t.co/hbrc0wOaI3

Producing a few dollars would please Reimer, but she contends that increasing pride in the city, revered for many attractions and opportunities, registers as more important than accumulating cash through a third party’s management expertise. Vancouver would not be singular among Canadian cities in making some sort of branding splash, as Toronto, through the same SVS Marketing firm that manages the former destination’s Translink transit-centric goods, has often sought to convey pride in its scenery through its eponymous transit commission. Regardless of how unique the idea is, implementing it could serve as a very positive way to move beyond the embarrassment that its logo revamp campaign produced.

For those among you with knowledge of Vancouver, what do you feel the City could benefit from selling? Also, should other cities, including American ones, consider similar measures to open stores, and, if so, growing civic pride, rather than going after legal tender, be their focus?