Vancouver residents, especially those who hold allegiance to the National Hockey League’s Canucks, have had very little to excite them this winter, but the rest of the year could prove a profitable stretch for the British Columbia city’s inhabitants thanks to their elected officials. On Tuesday, City Council, based on a motion by member Andrea Reimer, voted to have peers determine the viability of a Vancouver-branded products operation that a third party would oversee. 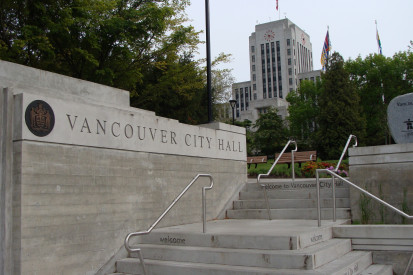 The unanimous acceptance of the idea furthers a brainchild that, according to the Vancouver Courier, the Vision Councillor had been pondering for years and will come to enlist city staffers to see if a cost-neutral retail site could further their environs’ marketing clout. Reimer took to Twitter late in the day to share the news, revealing that a “Made in Canada” declaration would factor into the items’ appearance. Non-Partisan Association Councillor George Affleck made the amendment suggestion, noting, “I think it’s important we focus on Canadian-made products to help our overall economy in Canada but also to help that third party understand the parameters which they should be working within.”

Council: Motion on supporting staff taking a look at cost neutral retail operation for Vancouver swag passes with addition re: "Made in Canada". I would have preferred "locally made" but good enough to get a unanimous vote

Regardless of what print the products might bear, implementing any such goods would help Vancouver, per Reimer’s interaction with the aforementioned publication, join other “world-class cities with high brand value” in guiding such a retail-focused destination. Long lauded as a thriving expanse, Vancouver, through the third-party entity, would look to draw more attention to its amenities through offerings like gifts that have customarily gone to visiting dignitaries, notably a map-containing umbrella, and more renown for its creative community if the powers that be could secure licensing agreements for artists and designers.

As reported by Promo Marketing ahead of the vote, Reimer has held that the location could end up being a success even if it were to have a revenue neutral existence, as “it would be worth it to be able to get items to people that they want to have to show their pride in Vancouver.” Owing to their municipal government affiliation, she and her contemporaries would need to be quite transparent in reporting financial information pertaining to the Vancouver-branded merchandise, as the City’s involvement would necessitate accountability that differs from that which Toronto’s TransLink exhibits in working with the SVS Marketing Firm to sell transit-focused products.

Reimer, who will not seek re-election come the fall, and the City Council constituents will see if city workers craft enough positive recommendations for the desired production of said rain blockers, mugs, T-shirts and other commodities all geared toward stimulating pride in Vancouver and, quite possibly, adding a few dollars to the collective coffers. With many compelling occasions coming up, perhaps the city could have the products approved and produced in time to have them available in conjunction with the occurrences and could have the retail location validate the middle element of its “By Sea, Land, and Air We Prosper” motto.

Related story: An Itemized List of (Not Quite) Every Promotional Product Canada's Government Purchased Last Year

Staples Is Trying to Buy Office Depot Again (and Thanks to Amazon, It Might Work)
Comments
Happening Today
The 3 Product Categories Seeing the Most Demand