The Vancouver Canucks, who won five straight division titles from 2009 through 2013 but have made the playoffs only once in the four subsequent seasons, will not likely make much news this year unless twin mainstays Daniel and Henrik Sedin can somehow summon magic from their 37-year-old bodies and will them to a postseason berth. Even if their play does not inspire inspections, they will at least be able to say their franchise retains relevancy, at least in the artistic sense. Their British Columbia-based organization’s former flying skate logo appears to have struck the fancy of fashion titan Versace, which is marketing a women’s sweatshirt whose graphic design element very closely resembles the out-of-use emblem. 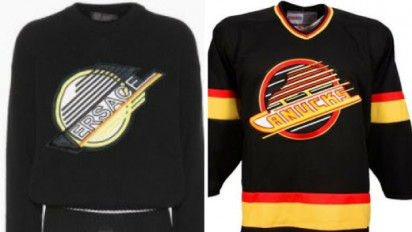 Is Versace giving a nod to a logo formerly worn by the Vancouver Canucks? (Image via Twitter)

I began following hockey as a 10-year-old in 1989, and since I am a lifelong Philly guy, the Flyers immediately appealed to me, along with a couple other East Coast clubs. However, since the sport is Canada’s national pastime, I learned about the squads situated to the north, and the Canucks stood out. They resonated with me as a hardworking team and even advanced to the Stanley Cup Finals in 1994, and their logo was part of their appeal for me. They ceased using it in 1997 and began to become strangers to postseason play (coincidence?), but it certainly seems the last two decades have not caused their insignia to cease to fascinate.

The Vancouver Courier, minus input from the Milan-headquartered luxury fashion company, states that the new garment is completely based on the logo that the team first emblazoned on its jerseys in 1978. One cannot completely fault the publication’s Daniel Wagner for making the assertion, as the similarities abound, even down to the fact, which neither the company nor the franchise could obviously control, that each top contains seven letters. The Canucks had since added numerous primary and alternate logos, but the Flying Skate design registers as their oldest identifier since their 1970 debut and certainly retains some of its mystique.

Thanks to my aforementioned fondness for it, I am leaning toward tabbing Versace with ripping off the symbol, and while the players are sharpening their skates ahead of October 7th’s season opener versus the Edmonton Oilers, the organization’s legal representatives might be honing their barbs for the 39-year-old fashion icon. Versace’s 100-percent polyester creation is going for up to $1,525 on one retail website that mentions the in-question graphic as “a retro-nodding stone embellished logo patch.”

If there were a fashion penalty box, the powers that be would probably confine the apparel item to it, especially since an actual jersey featuring the 20-years-defunct logo would cost less than one-seventh of the Versace product. “This sweater is exactly what we’d expect a basic from Versace to be—a body-hugging, sensuous design with a bold pattern emblazoned across the front” declares mytheresa.com, adding that end-users can wear it “with anything and everything—from boyfriend-cut jeans to feminine skirts.”

To each her own, but Versace seems as if it warrants two minutes (and maybe a lawsuit) in the hypothetical sin bin for not stitching together a better concept.