Out of the 31 National Hockey League teams that took to the ice this most recent regular season, nobody had lower expectations placed on them than the Vegas Golden Knights. As a new franchise, the Nevada bunch stood no chance of competing against established Western Conference foes, many naysayers proclaimed, and would certainly mimic the futility that most first-year clubs tend to endure. Then, well, referees dropped the puck in T-Mobile Arena and in other buildings, and the Golden Knights began downing conference combatants and other squads at an alarming pace, setting numerous records and claiming the Pacific Division title. Their success has garnered immense praise from fans and pundits alike—and, for fans, securing team-affiliated promo items via the internet has become comparable to scoring playoff seats.

Fresh off a first-round sweep of the Los Angeles Kings, the Golden Knights will take on the San Jose Sharks, themselves four-game victors over the Anaheim Ducks. But no matter how much more progress they achieve this year, the desert denizens will figure to be economic heavyweights. Of course, though, an extended postseason run will bolster their chances that supporters will look to cash in on accumulated giveaways. 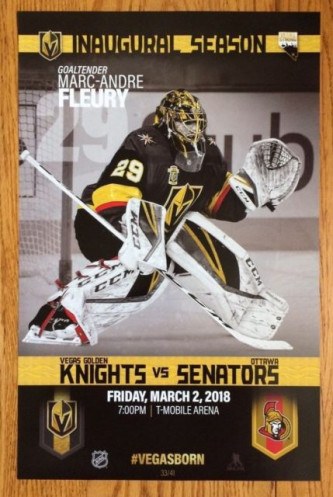 Those backers have already scored some side income by taking to eBay, with posters, pucks and Chance the mascot bobbleheads being primary bid fetchers. While securing what we will tab “ordinary” promotional items bearing the Golden Knights’ branding has also become a common practice (for example, though Philadelphia is an Eastern Conference city whose Flyers also qualified for the playoffs, we saw a group of children decked out in Vegas gear while playing street hockey last week), the thrills associated with selling and purchasing arena-issued goods might lead online consumers to give customary commerce exchanges a run for their money. As of today, eBay lists more than 9,000 products pertaining to the Golden Knights, an amazing haul for the squad that finished with the league’s fifth-best record. Along with the eBay-based success, the franchise, according to the Review Journal, has also won favor through Fanatics.com, which, as of April 12, had the Golden Knights lancing the 30 other league constituents as the top merchandise mover and drawing adoration from buyers in nearly 90 countries.

Back to those early-season detractors—they had just cause in supposing the Vegas-situated athletes would lose most of their jousts, as plenty of established franchises struggle to achieve consistency. But the Golden Knights, whose starting goalie Marc-Andre Fleury has moved the fifth-most jerseys, might represent a changing of the guard in sports. No matter a team’s age, professional athletes all abound in pride, and that drive to be competitive from day one can yield a few surprises. Therefore, who’s to say that the Golden Knights cannot stun us all and hoist the Stanley Cup? Imagine the merchandise that could come from what would be an unprecedented occurrence and the online jostling that such an achievement could engender. What has happened in Vegas has not deserved to stay in Vegas, and the Golden Knights are a legitimate team that is making fans feel enriched and richer.