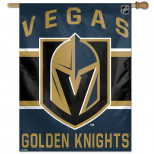 The Army parachuting unit could have a problem with Las Vegas' new NHL franchise. (Image via shop.nhl.com)

Just a few days after the Vegas Golden Knights NHL expansion team announced its existence, the team already has attracted some controversy over its name. According to ESPN, the U.S. Army's elite parachute team, which goes by the name Golden Knights, could have a problem with the name.

What's interesting here is that the hockey team's owner, Bill Foley, is a graduate of the U.S. Military Academy at West Point, and made sure that his team's name didn't step on the toes of the Army Black Knights.

"I have complete respect for the U.S. Army and all that it does for our nation," Foley told ESPN. "Our development and use of the name Vegas Golden Knights was based upon Nevada being the largest gold producing state in the country and the golden tones of the Las Vegas Strip."

So, it's unlikely that the Army will take any real steps to force Foley to change the name. (Even though he does have a fallback plan—Foley trademarked Silver Knights and Desert Knights as well.)

NHL deputy commissioner Bill Daly said that he doesn't expect any issue, but we'll monitor the story as it develops.