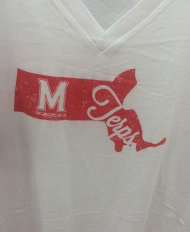 Walmart probably had the right idea: "Let's celebrate the University of Maryland! The promotional T-shirt probably would be an instant hit with the school's large number of students and alumni."

The imprinted Russell Athletic T-shirts became the subject of an Internet frenzy as customers took to Twitter to voice their objections. Walmart, at first, defended its graphic design error, but eventually realized the error of its ways.

@Samficco The state of Maryland is shaped to dip down on the right hand side which includes the word "Terps" for the team. -Marie

In response, Walmart has pulled the T-shirts, according to The Washington Post. The company issued an apology.

"We are working with Russell Athletic to determine how this happened and, in the meantime, are removing the shirts from our stores," a Walmart spokesman told The Washington Post. "We understand the pride Marylanders feel for the Terps, and apologize for the mistake."

Obviously, college T-shirts always are a hot product, but it definitely helps to have some quality control!