Excluding the 2015-16 season, which saw them go 41-41 and miss the postseason by three games, the Washington Wizards have proven a steady Eastern Conference presence since 2013, with four postseason berths (including this year’s impending slate) to their name. The success that the Southeast Division squad has achieved, along with its conference affiliation, though, has not made it immune to outsiders committing gaffes on where the ballers call home.

For the record, the athletes look to shoot the lights out at Capital One Arena in Washington, D.C., and not at any site in Washington State. However, those details did not stop Fanatics from offering a T-shirt that situates John Wall and crew all the way across the country: 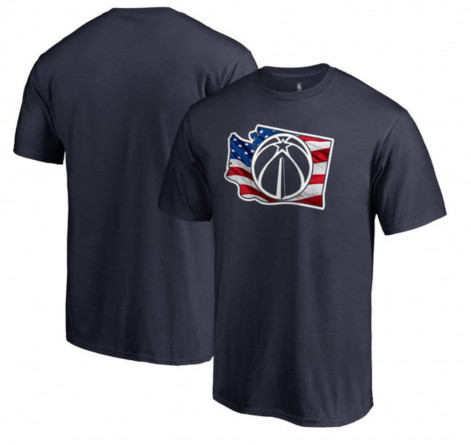 Realizing where D.C.-based franchises play has become the geographic equivalent of pronouncing “Arkansas” and “Illinois” correctly, it seems, as this marks the second time in under a year (not as if time really matters in these instances as much as proofreading and fact-checking do) that someone has botched an item involving one of the clubs. With respect to the Wizards, one can find this miscue especially frustrating, given that the Redskins stink (hey, we in Philadelphia now have bragging rights thanks to the Eagles’ Super Bowl LII victory) and that the hoops club could win its second-straight division title if it could leapfrog and hold off the Miami Heat by Wednesday.

When I began following basketball in the 1989-90- season, I developed some interest in the Seattle Supersonics, and the combination of Shawn Kemp and Gary Payton, not to mention the 2007 arrival of Kevin Durant, gave me many memories. But the Evergreen State has lacked an NBA squad ever since the team relocated to Oklahoma City a decade ago.

That move, the Wizards’ recent run and Fanatics' close licensing ties to the sports world should have served as sufficient means to help the site allow fans to prove their “extreme commitment to the Washington Wizards." But, well, something must have cast a spell over the designers' reasoning, because the team’s logo rests inside an outline of the incorrect destination.

The Washington Post ran an account of the matter, which shows that common sense can often shuffle off its mortal coil in the light of day. The publication’s link to the item now directs end-users to Fanatics’ homepage, and the item does not appear in a search of Fanatics' site, so it appears the popular sports apparel provider has addressed the gaffe.

The NBA playoffs are almost upon us, and if the Wizards can duplicate or even top the success they have had over their last three postseason trips, winning a series in each, expect merchandise items to become more popular purchases on Fanatics. If that happens, here's hoping the site double-checks its geography. Even if Fanatics wises up forever regarding the Wizards, our crystal ball tells us another squad will inspire some sort of mistake down the line. The least we can do is have a little fun with it!

Related story: Can You Spot the Major Decorating Error on This Washington Redskins Novelty License Plate?