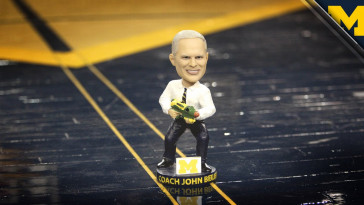 University of Michigan basketball coach John Beilein will be the subject of Saturday's bobblehead promotion. (Image via Twitter)

The NCAA Division I Men’s Basketball Tournament has yielded numerous amazing shots, particularly buzzer-beaters, since its 1939 inception. The most recent rendition featured a slew of celebrated heaves, but one could argue that a different sort of discharge, that from a Super Soaker, drew the most attention. Following his club’s second-round upset of the Louisville Cardinals, University of Michigan coach John Beilein doused his Wolverines with the squirt gun, so to commemorate the March victory, the school will distribute bobbleheads featuring the leader and the toy on Saturday as the team hosts its conference opener.

The March 19 triumph capped an incredible campaign for the Ann Arbor-based ballers, whose 26-12 record included four victories that yielded the Big Ten Tournament title. Falling by a point in their next contest—a Sweet Sixteen matchup against Oregon—the Wolverines immediately looked forward to solidifying themselves as a contender for the national championship. The squad will enter the Crisler Center-situated tilt against the Indiana Hoosiers with a 6-2 ledger following last night’s loss to North Carolina and will surely have an opportunity to stoke their fan base and recruit a few bandwagon followers, as CBS will televise the 12:30 tussle.

The Detroit Free Press reported mid-month that the bobblehead promotion is enjoying widespread appeal, with the remaining collectibles available through a $40 ticket purchase. Coming off the defeat to the Tar Heels, the Michigan roster members will look not only to avoid a losing streak but also to score a victory over a foe that holds a healthy head-to-head advantage against them. The visitors will venture to the court with a 4-3 record under first-year sideline overseer Archie Miller, so it will be interesting to see how Beilein, the 2014 Big Ten Coach of the Year, tries to outsmart the former Dayton leader in his inaugural conference clash. It will also be compelling to see how many smiles the bobblehead engenders, as the novelty good has received the subject’s approval.

“The good thing was there was gray hair, but at least they didn’t have the baldness look,” Beilein said of the promotional product. “So I was very happy about that. It’s a quality bobblehead.”

College sports programs regularly pay tribute to players, coaches and instances that either put them on the map or intensified their legacy. For Michigan, which has had some of its hoops accomplishments vacated, including distinction as national runner-up in 1992 and ’93, the Sweet Sixteen run marked the school’s best postseason effort since the 2013’-’14 team made the Elite Eight. Beilein also guided that team and the ’12-’13 unit that lost the national championship game to Louisville (Revenge can be sweet, can’t it?), so he has proven himself a winner worthy of admiration and immortalization as a bobblehead. In terms of creativity, I have to say this one is pretty neat. It takes an unexpected moment of levity and reminds fans that as long as Beilein instructs the Wolverines, they will always be able to whet their appetites for big wins.