Would You Wear Wireless-charging Apparel? 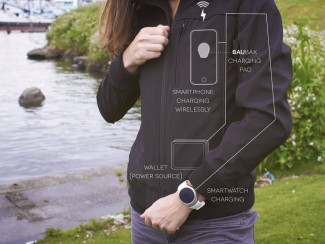 The world of technology moves pretty fast. But, no matter how many phone upgrades or software updates we do, there’s one problem the tech world can’t seem to remedy: keeping our phones charged.

Luckily, when we’re on the go, we can rely on portable power banks. But one apparel startup wants to make the process even simpler.

According to CNN Money, BauBax—the company behind the all-in-one travel jacket with 15 built-in features that raised more than $9 million on Kickstarter, becoming one of the most funded campaigns in the site’s history—announced it’s latest endeavor: wireless-charging apparel.

The machine-washable clothing has copper wire built into it, as well as a wireless charging pad stitched inside a pocket.

So what’s powering the chargers? The company’s slim, lightweight and removable 4,000mAh battery bank. That power is enough to provide one full charge to smartphones, two charges to smartwatches and four charges to Bluetooth earphones. The battery bank takes two to four hours to recharge.

Additionally, Tech Insider reported that the chargers will have a maximum temperature to prevent the device from growing too hot, and keep end-users safe and comfortable.

Most smartphones, like those made by Samsung, Google Nexus, Microsoft and Nokia, have the built-in Qi wireless charging capability, making them directly compatible with the line. Apple users, however, will need to purchase a BauBax iPhone case that incorporates the Qi standard in order to enable wireless charging.

The Kickstarter campaign’s goal is $100,000, and the company hopes to have products ready for January 2017.