Here's a Wearable Device That Can Read Your Thoughts 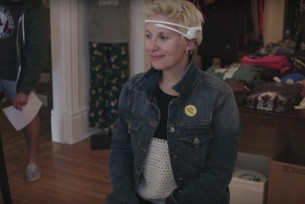 Life is Good, an apparel brand famous for its optimistic T-shirts, has delivered a marketing stunt for the ages. As it begins its move into the Canadian market, the brand has released a new advertising campaign created in collaboration with ad agency The Garden and digital production firm Thinkingbox. The result is a short video titled “The Power of Positive Thinking.”

In the video, subjects wear an EEG headset, called an “Optimism Machine,” and, facing a faucet and an empty glass of water, they are encouraged to think positive thoughts or to concentrate on optimistic Life is Good designs. If they do so, the faucet turns on and fills the glass with water. If they fail, the glass shatters, and they are forced to pick up the pieces with their bare hands.

OK, so that last part was a lie. Everyone in the video succeeds with the task of filling the glass, because it’s a commercial. The way this works is actually pretty interesting—the headset is able to read brainwaves, and when subjects focus on a particular happy thought or image, the repeated thought pattern triggers the device to send a signal via Bluetooth to the tap, which in turn, well, turns on. And thus, the glass becomes half full­—or half empty, depending on preference.

The key phrase here is repeated pattern. As it turns out, this is what the EEG headset actually uses to trigger the faucet, and not positive thoughts. Of course, you could think repeatedly about positive things in order to do so, but a steady stream of awful images would get the same result. This must be noted, of course, because we just can’t have nice things in this world. Cynicism and negativity have their place, as always.

And yet, there is something admirable about Life is Good’s campaign. By encouraging people to think positively, and to see that optimism can actually cause something physical to occur, they are symbolically representing how positivity can make an impact on our world. Whether or not you agree with this sort of message, at least we can all agree that optimism is in dangerously short supply these days.

There may also be something for the promotional apparel industry here by way of smart apparel. While the EEG headset isn’t exactly an apparel item, its wearable nature points to the possibility for apparel manufacturers to incorporate similar brainwave-reading devices into daily apparel items. Imagine being able to manipulate lighting or raise and lower shades without having to get up and do so. We admit, those are pretty simplistic visions for the potential of this type of technology, but there are people who are much better than us at coming up with those sorts of things, so we’ll leave it to them.

Regardless, as apparel is developed with the power to unlock doors, interact with smartphones and read biological measurements, it’s quite clear that the sky’s the limit with these technologies. The way things are going, it seems that in the future humans will be constantly connected with the digital environment through devices and integrated smart apparel alike. With such potential on the horizon, it’s a great time for the promotional apparel industry to jump on board. As for Life is Good, we shall see if positive thoughts translate into positive profits. Lucky for them, Canadians are renowned for their kindness and positivity, so there really shouldn’t be too much to worry about, eh?