Wearable Tech Has a Future in the Cruise and Travel Categories

Wearable technology is becoming more prevalent in much more than just the health and wellness sector. It's being used by entertainment companies and sports teams to create coordinated design elements in stadiums and during concerts. It's being used in apparel to let you know when your Uber driver is coming. It's being used to pay for things at festivals.

So, it makes sense that wearable technology has become ubiquitous in the passenger cruise industry.

Ship Technology reported that more and more companies are using items like pendants for passengers, AR glasses for ship technicians and fitness-tracking bracelets for other maritime employees.

Citing Statista, Ship Technology wrote that there were 325 million wearable tech items worldwide in 2016. That number is now about 593 million, and experts predict it will hit 1 billion by 2021.

What's most interesting about the shipping and cruise sectors is how they're using technology for specific roles. Nautix, a hands-free device created by Garmin that attaches to sunglasses and eyewear, gives seafarers real-time marine data like speed, water depth and temperature, wind direction, engine RPM and more.

For the hospitality side of things, Carnival Cruise Line is using an item called the Ocean Medallion on its Regal Princess ship. The medallions are worn as pendants or watches, or can be clipped to clothes. The item works as a catch-all ID of sorts, allowing guests to order food and drinks, book activities, track members of their party or enter their rooms. It's pretty similar to the RFID bracelets used at festivals. 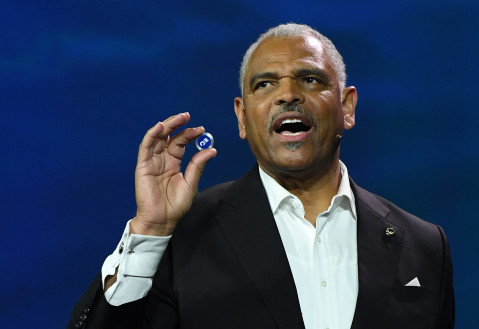 President and CEO of Carnival Corp. Arnold W. Donald talks about the company's new Ocean Medallion as he delivers a keynote address at CES 2017 at The Venetian Las Vegas on January 5, 2017 in Las Vegas, Nevada. | Credit: Getty Images by Ethan Miller

There's also the necessity for safety on these ships, and the European Union has been working on a project to develop technology that can locate passengers in emergency situations, such as life jackets, bracelets, smart cabin key cards and other handheld devices.

With just about every company doing some sort of app integration these days, it makes a lot of sense. Customers have a tangible object that they can easily hold onto that does the job of sometimes five different items. It's convenient and it creates more of an identity for the company offering the item.

Since hospitality and travel is such a large part of the promotional space, and as wearable tech has seen a boom in the athletic apparel category, it's a good idea for distributors to pay attention to it for other, different applications than they may have thought about before.