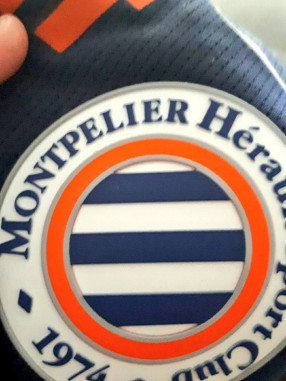 The Montpellier Hérault Sport Club is assisting a Vermont high school after having received jerseys bearing a spelling mistake. (Image via Twitter)

As the world’s most popular sport, soccer (or association football to most of the global family) has merited such acclaim that followers frequently refer to it as “the beautiful game.” While that nickname certainly corresponds with the practitioner’s immense talent, it also can refer to the sense of goodwill inherent within the at-large community. Thanks to a spelling error in the manufacturing of its jerseys, Montpellier Hérault Sport Club, a member of the French football league system’s Ligue 1, is gracing an aptly named United States secondary education facility with the garments so that its teams can don the tops and possibly help raise money for their learning institution.

Montpelier High School will become the beneficiary of the blunder that the European club’s apparel provider committed, with officials letting the New England-based haunt know of the gesture on Tuesday. While fans of the professional unit had cause for concern upon seeing “Montpelier” on shirts that should have featured another “L,” the registrants at the Vermont location are happy that someone yet again proved that nobody’s perfect.

“We have nice things for our students but certainly not the level of professional jerseys,” athletic director Matt Link said, noting that “I’m sure the kids will just be ecstatic” despite the impending arrivals’ colors not matching the hues of the teenagers’ customary tops.

We all know we should make lemonade when life doles out lemons, so the French team put a promotional products industry spin on that sentiment by making the outreach to the equally soccer/association football-crazed community, with Montpelier mayor John Hollar stating that his state’s capital city has “a lot of soccer fans generally, [and] a lot of participants in our schools.”

Given that the French league squad’s overseers noticed the dropped “L” a week ago today, their finding such a quick and generous solution to the snafu deserves a nod. Their charges’ supporters have learned that they can have the proper logo affixed to their jerseys, purchase new ones or seek reimbursement. As for the fortunate adolescents, the Associated Press revealed they might don the shirts for a pair of games, giving male and female players an opportunity to emulate the pros, though not in official matches, and that city manager Bill Fraser could help their site orchestrate the sale of the jerseys through a booster event. If the teams outdo their foes, expect more than a few mentions of “Merci beaucoup” to reach their benefactors’ social media accounts.

Our 5 Favorite Promotional Products of the Week: BAMKO's Dunkin' Cups, 'Up' Merch and More
Comments
The Top Lists