Many consumers have made participation in the farm-to-table (or farm-to-fork, depending on one’s nomenclatural or alliterative tastes) movement a central component of their identities, obligating themselves to frequent restaurants that limit the number of sources they seek to help provide patrons with delicious dishes. That allegiance offers an interesting look at the depth of responsibility that the public often demands from businesses, with the movement’s appreciation for minimalism working to establish durable relationships between eateries and their agricultural peers. Not every form of commerce enjoys such fluidity, and any list of vulnerable revenue seekers must include retailers, whose supply chain commonly leads to upsetting situations, such as the recent discovery of a swastika-bearing shirt at a Florida-based Ross Dress for Less. 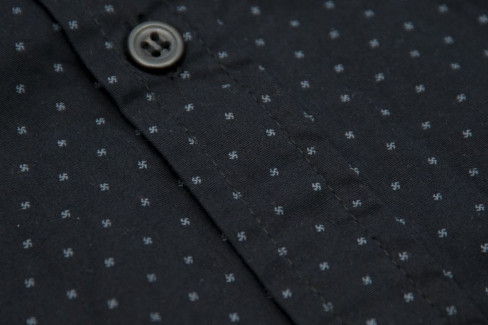 Ross Dress for Less has removed the swastika-bearing shirt from its locations. (Image via Bloomberg)

Sadly, the symbol, whose ancient origins hold it as a positive icon, has had its integrity compromised because of Nazi Germany’s appropriation of it preceding World War II. In the summer, Promo Marketing addressed an effort to rebrand the bastardized interpretation of the symbol, but it should be quite clear that any garment that glorifies the views of Adolf Hitler and his contemporaries will never resonate with the general public. A shopper spotted the controversial top in the Sunshine State, but, unlike Teespring, this matter’s powers that be have claimed that oversight, and not an overt attempt to be controversial, led to the miscue. In doing so, they revealed the intricacies present within the retail industry.

Bloomberg presented an intense analysis of the gaffe, noting that off-price retailers like Ross often do not participate in the apparel production process because they choose to buy from brands. That puts them and their similarly-minded contemporaries on a different plane with regards to quality control but does not stop them from catching most mistakes, as they still conduct various audits of the goods.

Despite the vetting that one could say is akin to how dining locations treat foodstuffs, embarrassing mishaps make their way into stores and leave consumers wondering what happened. Bloomberg details a few of these, essentially stating—in exploring the Ross predicament—that the need for so many steps in taking a shirt, or any apparel item, from concept to completion, including its placement on shelves or racks, means that we will never be free of erroneous commodities. That is not to say entities should reduce the measures they enlist to generate interest in their products; rather, it is a reminder that they really, when not intending to cause trouble, need to do a stellar job catching at the last second any problem that could lead to public backlash.

With respect to Ross, whose offensive shirt bore the label of Airwalk, “a pioneer in the skate and action sports community” that Authentic Brands Groups LLC (ABG) owns, the India-produced end design, according to ABG chief executive officer Michael Haddad, bore no resemblance to what his company had purchased through Fashion Optics Inc. He has left the task of destroying the shirts—numbering several thousand—to Ross, stating “The problem was contained; it was remedied.”

We will undoubtedly experience more instances where blatantly disturbing messages or graphics appear on shirts, and those occasions will definitely deserve rebukes. What is your stance on the Ross situation, though, where it appears (according to Haddad) that a factory mistake morphed a would-be depiction of a star pattern into something “confusingly similar to a swastika?”