What Are the Most Effective B2B Social Media Channels?

The Cult Branding Company offered 52 types of marketing strategies in a 2013 look at exchange relationships, and although it did not assign them rankings, it placed “social media marketing” at No. 32. For many businesses, the form of communication might even find itself in last place, as the medium can be a tough sell despite its possibilities. However, nobody can deny the ubiquitous presence of such a form of communication, so it is compelling to inspect which B2B social media channels have proven most effective, with LinkedIn, which 97 percent of B2B marketers use for their content marketing efforts, taking the top spot.

An exhaustive piece by Sprout, dubbed “How to Create a B2B Social Media Strategy (Without Being Boring),” notes early on that “B2B companies still rely on traditional tactics like cold calling and attending business networking breakfasts” to land or retain clients, taking them to task for believing that these alone can bring about favorable outcomes. Over the course of his analysis, author Dominique Jackson emphasizes lead generation because, well, that is what everyone is aiming to celebrate, and touts social media as a mandatory component of that.

Given that LinkedIn has a more professional air about itself than other sites, few would probably be shocked to learn that 63 percent of marketers tab the site as their go-to B2B social media ally. Twitter was next at 55 percent, with YouTube in third at 48 percent. Facebook checked in at just 32 percent, something of a surprise given its enormous user-base, while Google+ unsurprisingly brought up the rear at 20 percent.

Do these results mean B2B marketers are seeking LinkedIn as a safe, relatively controversy-free means to attract eyeballs and acquire signatures? Does their choice of LinkedIn as the clear-cut No. 1 assign less-than status to other marketing aids? Reading Jackson’s analysis and inspecting the results chart compiled by the Content Marketing Institute reveal that we need not be so negative regarding the first inquiry or dismissive with respect to the second question: 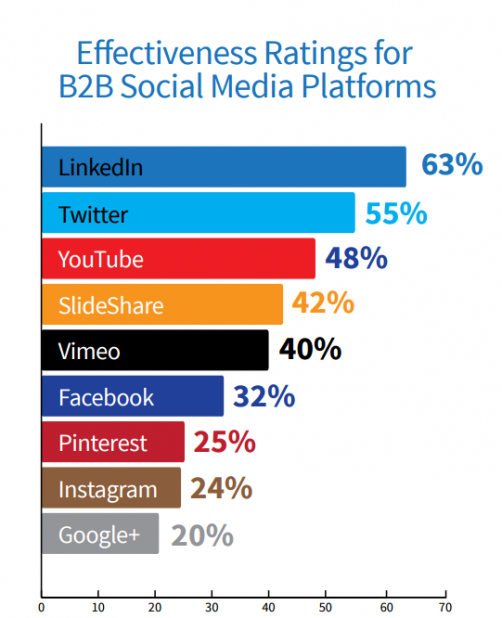 We shy away from generalizations, but, hey, nobody is perfect, so we are going to say that everyone loves a story, and social media can help businesses to tell their tales with ease if they approach it well. Yes, someone might consider LinkedIn lacking in glitz and glamour, but the fact that it took the top prize means that marketers consider it a great destination for doing exactly what Jackson says will win regard with social media outreach—namely, making one’s presence on it about that company’s audience and not its business. The author, though, titled a whole section of his article “Don’t Restrict Yourself to Just LinkedIn,” and here is where ingenuity can help B2B social media platforms take off.

The gulf between the effectiveness rating of LinkedIn and, say, Instagram checks in at 39 percent, so that latter must be a terrible way to market, right? Believe that at your own peril, especially since, as Jackson includes, 55 percent of B2B buyers search for information on social media. In other words, yes, Instagram is near the bottom now, but will that always be the case? Since few brands are making social media a strong element of their B2B exchanges, any platform can be a potential source of some much-needed shots in the arm.

We all know, thanks to William Shakespeare, that the world is our oyster, so it could be a pearl of wisdom to start to emphasize social media to a great extent, especially after inspections of how well one’s competitors have fared on particular platforms. Overall, we must take heed of the points that Jackson makes in concluding his article: If you haven’t been using social media marketing, you’re already behind, and the time is now to call on it to grow your brand and acquire leads. (And, indeed, a number of promotional products industry people and businesses are using social media extremely effectively.)

What does that mean for your business? How have you already benefited from social media? Which platforms have you used most? Which have you shied away from, and why? Which do you hope would do better, and which have you planned to gain more renown through your campaigns? We are incurably curious to know how B2B social media factors into your daily dealings.