What Campaign Merchandise Is Allowed At Polling Places? (Spoiler: Not Much)

A combination of the e-commerce world of today and arguably the most contentious presidential campaign in modern history has created a team sports atmosphere regarding campaign merchandise. American voters are all too ready to show what side they’re on through T-shirts, hats, buttons and everything else.

One place they can’t show that support, though, is the actual polling place (in most cases, anyway).

In an effort to limit politicking at polling places and to let people vote in peace without any influence, each state has some sort of restriction on what people can do at the polls. Some states actually limit what voters can wear.

In states such as California, South Carolina, Vermont and Tennessee, voters cannot wear any article of clothing with a candidate's name or likeness on it. The measures vary state-to-state, and it’s up to poll workers to enforce the rules. However, it's not up to them to decide what is and isn't acceptable. One poll worker in Tennessee was fired after turning away voters who wore "Black Lives Matter" and "I can't breathe" T-shirts. 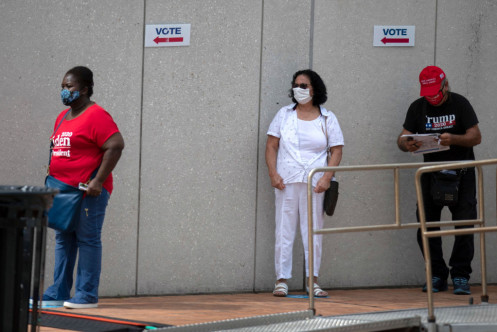 In Minnesota, all active candidates whose names are on the ballot are off limits in terms of merchandise. But, voters could still show their support implicitly, like wearing a former GOP candidate’s button.

That wouldn’t fly in Kansas, however, where the wording is a bit more broad and the rules prohibit “wearing, exhibiting or distributing labels, signs, posters, stickers or other materials that clearly identify a candidate in the election or clearly indicate support or opposition to a question submitted election within any polling place.”

So, if you were to wear an Obama T-shirt from 2008, that probably would not be allowed.

And check out the extremely specific rules in Maine (emphasis ours):

A person may not display advertising material; operate an advertising medium, including a sound amplification device; or display or distribute campaign literature, posters, palm cards, buttons, badges or stickers containing a candidate's name or otherwise intending to influence the opinion of any voter regarding a candidate for an office or question that is on the ballot for the election that day on any public property located within 250 feet of the entrance to either the voting place or the building in which the registrar's office is located. The term "sound amplification device" includes, but is not limited to, sound trucks, loudspeakers and blowhorns.

This subsection does not apply to advertising material on automobiles traveling to and from the voting place for the purposes of voting. It does not prohibit a person who is at the polls solely for the purpose of voting from wearing a campaign button when the longest dimension of the button does not exceed 3 inches.

If you don't get the memo on any of these rules, however, it won’t disqualify you from voting. You’d just have to cover up whatever you’re wearing, or turn an article of clothing inside out.

Some states get very specific beyond just apparel, like Arkansas, where it is illegal to hand out items like “buttons, hats, pencils, pens, shirts, signs or stickers containing electioneering information.” This includes not only a candidate’s name, but also any ballot measure number or subject.