“Water, water, everywhere,” Samuel Taylor Coleridge famously wrote in “The Rime of the Ancient Mariner,” providing in the 1834 poem a sentiment that science confirms, as water covers 71 percent of the Earth’s surface. Obviously a necessity in sustaining life, the liquid also plays a vital role in keeping consumers clothed. And although the aforementioned staggering statistic could make one think everyone can easily access the substance for various tasks, certain parts of the world are struggling, with many of those locations serving as sourcing sites for the apparel industry.

“We are indeed a planet in crisis,” Mina Guli said in giving a Textile Exchange Sustainability Conference keynote speech last month. “By 2030, experts predict that there’ll be a 40 percent greater demand for water than what’s available.” 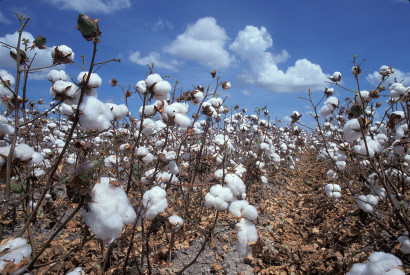 The rampant use of cotton has drawn the ire of those who wish to conserve the world's water supply. (Image via Wikimedia Commons)

The thirstforwater.org founder enlists her organization to look at the aquatic qualms that the global family faces, with the World Economic Forum last year giving her and her contemporaries more gumption by tabbing the solving of the water crisis as its chief chore for the next decade. While we have all seen recommendations for how much water we should drink, how many of us have pondered what amounts should go toward helping us don our wardrobes? As the straw that stirs the drink for Thirst, Guli wants for everyone to consider that tally, holding that “What we are doing to our environment without paying attention to it is horrifying.”

Sourcing Journal draws attention to the apparel industry’s reliance on water by citing how often the field calls on cotton for products. Through the World Resources Institute, it notes that roughly 33 percent of textiles’ fibers come from the commodity, with one cotton shirt’s composition requiring as much as 2,700 liters, or 713 gallons, of water, the same total that an individual drinks over two-and-a-half years. Cotton, therefore, appears the crux for Guli et al, and Sourcing Journal asserts that brands and retailers—in search of better costs—will exacerbate the problem if they continue to conduct heavy farming in areas already contending with what it dubs “water stress.”

Coupling that point with the publication’s look at garment manufacturing’s influence on industrial water pollution, one can easily surmise that Guli and likeminded people will keep calling for companies to think about what the world has to lose for them to earn their livelihood. That is not to say that anyone should classify anything cotton-based as a scourge; it does mean, however, considering exactly what comprises the processes through which we come to dress ourselves in apparel derived from the so-called fabric of our lives.