What Does a World Without College Football Look Like for Small Town Merchandisers?

College sports took a huge hit yesterday when the Big 10 conference announced that it would not be playing a single down of football this upcoming season. It’s not the first conference to do so, but with schools like Penn State, Michigan and Purdue, it’s a huge move for college sports and, by extension, the companies who depend on selling merchandise.

A lot of college sports programs with the biggest fanbases are in places without professional sports nearby—places like State College, Pa.; Lincoln, Neb.; and Tuscaloosa, Ala. For those fans, sports starts and ends with their local college teams. And for merchandisers in those areas, their livelihood would take a big hit if they can’t sell gear to fans before games.

Other major conferences, like the SEC, are still planning on playing, but hopes are dwindling as government officials plead with the public to do everything they can to mitigate the spread of COVID-19 so there is a safe way to play. If that’s not the case, there might not be any football in these towns.

“I guess we would just pack up and go home,” Alex Gatewood, owner of Tuscaloosa, Alabama-based merchandiser The Locker Room, told Patch. “I don’t think they’ll have football. I think when the Big 10 closed, that showed what’s going to happen.”

In the meantime, business owners like Gatewood have been able to find ways to stay successful. Like so many other businesses, face masks have been a popular buy. And as students return to campus, that will likely continue. But it won’t bring the same numbers as game day. 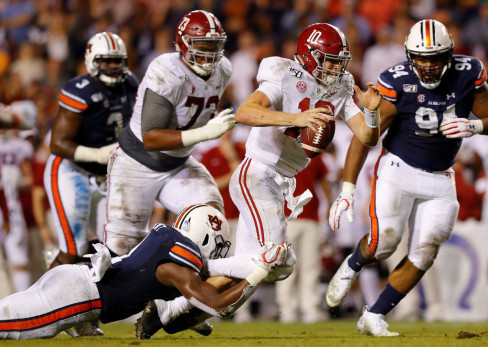 A canceled college football season could be devastating to merchandisers in college towns like Tuscaloosa, Ala. | Credit: Getty Images by Kevin C. Cox

“If you don’t have on-campus people or people in the stadium, people tailgating, it’s going to hurt the town a lot,” Andy Horn, owner of High Tide Sports in Tuscaloosa, told Patch. “That’s a big source of revenue. But you’ve got to figure out ways to cut costs to make a little bit more money. I’m not optimistic. It’s looking like we’re not going to have fall football.”

He crunched the numbers, comparing a football game weekend with a normal one, and found that game weekends bring five-to-10 times more business.

“Every other retailer, you make your money in the fourth [financial] quarter and Christmas,” he said. “And the fourth quarter includes football season for us. The rest of the year, you’re just trying to pay bills.”

A few miles east and over in the ACC, Florida State’s hometown of Tallahassee is worried about how a sport shortage could impact business, too.

And with the start of the season theoretically right around the corner, the shelves are stocked and ready for fans.

“All of our fall apparel and merchandise has been stocked, including the new Nike [apparel],” Guy Moore, owner of Garnet & Gold, which specializes in FSU gear, told Palm Beach Daily News. “Since we depend on FSU and football, we are hoping for a great season.”

The issue is that football, especially at the NCAA level, is a lot more difficult than other sports logistically. You can’t put college football players in a bubble hundreds of miles of their classrooms. The constant physical contact is an issue. Traveling itself is a risk. With all of those compounding issue, fans and business owners are right to be worried that there very well be no football this year.

In a way, yes. Fandom doesn’t go away. You could get rid of football for the next 10 years and Alabama football fans would still find reasons to yell “Roll Tide” at you. And whether students are on campus or at home, they’ll find ways to support their school.

“It is just a setback,” Misty Bassham, owner of Bulldog Fan Zone in Fresno near Fresno State University, which also isn’t playing football as part of the Mountain West Conference, told ABC 30. “It is not forever, and come out and still support and still show that you are a fan.”