What Is 'Digital Merchandise' and Why Is This Rising YouTube Star Selling So Much of It?

"YouTuber" is a totally viable career now. Some people above the age of 30 or so might need a few minutes to process it, but content creators and influencers are turning their videos and vlogs into commercially viable businesses. That’s thanks, in part, to their own merchandising efforts.

We’ve seen promotional tie-ins with existing companies, like a TikTok star’s Dunkin' collaboration, or the way that social media platforms are starting to integrate branded merchandise stores into the user interface.

As their popularity grows, the need to monetize becomes paramount. That’s what YouTuber Sadie Aldis is doing now, having just hit 1 million subscribers.

Aldis’ merchandise store is pretty much what you’d expect, for the most part: There are beanies embroidered with her logo, branded smartphone cases and a (reasonably affordable) hoodie.

But what really stands out is the “digital merchandise” Aldis is offering in addition to the physical products. Considering she is a digital content creator, it makes sense to incorporate that for her fans. Along with her apparel and accessories, Aldis is selling things like proprietary filters and smartphone icons, bringing her own aesthetic and brand into a two-dimensional landscape.

In an interview with Tubefilter, Aldis said these were the most popular items with her fans. And she described the thought process behind the digital merchandise, crediting the instant delivery and customization ability:

By selling different types of merchandise, physical and digital, I have learned that each creator’s audience has a different preference of what type of merchandise they would purchase. Surprisingly, my digital merchandise, such as Lightroom presets and iOS 14 icon packs, were more successful than I was expecting! There is also a lot more room for customization, as well as time for revisions to be done. There is no shipping or physical inventory needed for these digital items, which makes the whole process a lot less complicated and faster. I would definitely suggest any creator start selling digital merch! 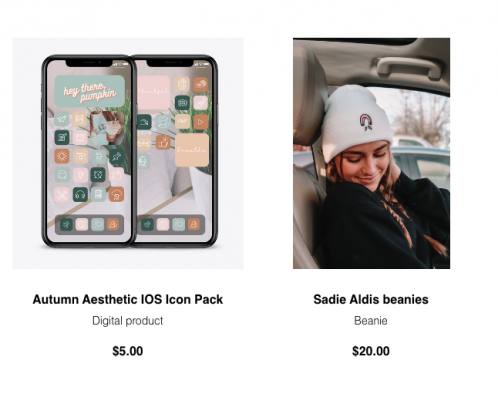 This past year has been mostly digital for most of us. Some people have only seen family, friends and coworkers on the computer or smartphone screen. Concerts have been livestreamed for most of us this past year, making it even more difficult to purchase our favorite concert tees. And NFTs became a thing, which we’re still sort of trying to figure out.

What this adds up to is the possibility for new ways to integrate digital and physical merchandise in a promotional campaign. It’s not totally unlike the bundling idea in music, where artists sell a T-shirt or other item that comes with a download of their latest album. Selling something physical combined with something digital appeals to people who like both collecting in real life and storing things digitally. This sort of digital kitting could include an NFT along with a T-shirt, or a coffee mug that comes with a special filter branded with the cafe’s logo.

Digital merchandise may be relatively new, but Aldis isn't the only one using it. Teespring began offering it for creators in October, signaling a move from niche product to wider appeal. Teespring also happens to be the merchandise partner for both TikTok and YouTube, with its platform integrated directly into both sites, making the company way ahead of the game as a merchandise provider for content creators.