Did your gym teacher ever make you play pickleball? Maybe you played it as an intramural sport when you moved to a new city. Or maybe this is the first time you've heard about the game that's growing in popularity nationwide.

If you're in that latter camp, don't worry. You're not alone. It's not quite on par with the NFL. (Yet.)

Basically, pickleball is a lot like tennis, except you play with rackets more like ping pong paddles, and you hit a ball that more closely resembles a wiffleball. The court is also a bit smaller than tennis. 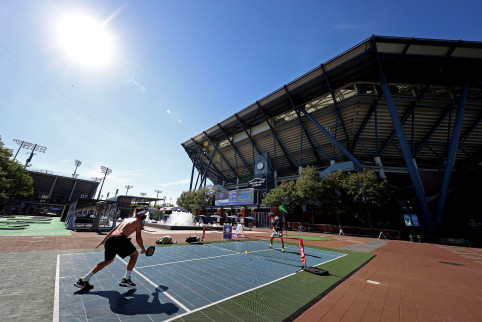 Jack Sock (R) of the United States warms up against his coach Alex Bogomolov (L) in a recreational game of Pickleball outside of Arthur Ashe Stadium on Day Five of the 2020 US Open at USTA Billie Jean King National Tennis Center on September 04, 2020 in the Queens borough of New York City. | Credit: Getty Images by Al Bello

But we're not here to evangelize you into joining your local league. The point here is the sport is gaining popularity in the U.S. and is easily played just about anywhere by people of all ages. And that means potential promotional opportunities.

Pickleball brand Baddle just inked a deal with the NHL to create branded gear with NHL teams' imagery on them. The company will create paddles, paddle covers and grips with designs featuring every NHL team.

"The NHL partnership gives Baddle the ability to reach across borders in ways that other leagues cannot," Jordan F. Reber, CEO of OvareGroup, Baddle's parent company, said in a press release. "Pickleball is more than just a North American sport and is growing rapidly in many emerging markets."

Apparently the Tampa Bay Lightning players got into it while in the NHL bubble in 2020.

These guys will compete in anything. 🏓

Kevin Shattenkirk (@shattdeuces) and the @TBLightning have become quite familiar with the pickleball courts inside the bubble. #StanleyCup pic.twitter.com/7HYmjd4Sqf

If the NHL is interested enough in pickleball, that means that there are other opportunities to bring pickleball into your promotional fold. Resorts might look for branded paddles if they have a usable court. Recreational leagues might want to throw their logo on them for people to use.

According to Parade and NPR, 4.8 million people now play pickleball in the U.S., compared to 3.46 million in 2019. There are two national professional tournaments, and the sport's governing body isn't ruling out a push for inclusion in the Olympics eventually.

More and more places are opening up dedicated courts, too.

Sports clubs and hotel groups, including Marriott and Omni Resorts, are converting tennis courts to or building new courts for pickleball, while a restaurant chain called Chicken N' Pickle that has locations in four states has said it will double its footprint within the next year.

Once those businesses have their own dedicated pickleball space, they might be looking for branded products.

It's not totally unlike e-sports, which took off in popularity and are now accepted in the mainstream competition sphere. Pickleball might look kind of goofy to the outsider, but it's exploding in popularity, and that means there is untapped promotional potential.