What Will Under Armour Look Like Without Kevin Plank as CEO? (Probably Not That Different) 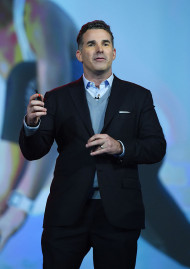 Kevin Plank announced he would step down from his role as CEO of Under Armour in 2020. | Credit: Getty Images by Ethan Miller

Last week, Under Armour announced that its founder and CEO Kevin Plank is stepping down from the position. Plank's position will be filled by current chief operating officer Patrik Frisk on Jan 1., 2020. Plank isn't completely distancing himself from the brand he created, though. He'll still be the executive chairman and brand chief, according to CNN.

So, for Under Armour, this doesn't appear to be a complete tidal shift like what happened at American Apparel after Dov Charney left the company and it went in a more family-friendly direction. What it might do for Under Armour as a financial entity, however, is create a more positive appearance. Since Plank has been the only one in charge of Under Armour, that means that all of its success—and recent problems—fall on him.

After managing to break into the highly competitive sports market (that's a good pun) and reaching stock highs in 2015, growth started stagnating in 2017. Since then, Plank has been the subject of criticism as his company has struggled, with share prices falling 44 percent in three years as of last week, according to Forbes.

Since 2017, Under Armour spent more than $300 million to try to meet financial forecasts. That year, revenue grew just 3 percent, followed by 4 percent in 2018. This led to workforce reductions in the ballpark of 700 people.

As Plank tried to move Under Armour into categories beyond moisture-wicking apparel, getting in on the app game with the MyFitnessPal app, among other ventures, the confidence he initially instilled as the figurehead started waning. Other Under Armour higher-ups jumped ship, and the company restructured in 2018.

So, yes, Plank is no longer the only figurehead of Under Armour, and its success and failure won't be his alone to claim. But the Under Armour of 2020 is hardly going to be a new-look business, despite what it might want you to think.

"Given [that Plank] has 65-70 percent of the stock's voting rights, he's still very much in control of the company's strategy," Rick Patel, retail analyst at investment banking firm Needham & Company, told Forbes.

It will be interesting to see just how much his distance from the company's chief executive position is in name only, and how much control Frisk will have come 2020. It's going to be pretty difficult to associate the brand with anyone else, especially when Plank is seemingly right behind Frisk whispering into his ear, but it could be enough to do things to get back on track financially.

Whether this will impact demand for Under Armour in the promo industry, where it's available through alphabroder, remains to be seen. The brand, for all its recent struggles, is still a known name with consumers, and retail brands tend to perform well in promo.