As Valentine's Day approaches, love is in the air. Some people celebrate V-Day with expensive dinners or meticulously prepared dinners at home. Others just want some burgers and fries.

For those people, Whataburger is coming through with a wedding-themed promotional line in time for Cupid season.

The WhataWedding collection includes T-shirts that say "WhataWedding," "WhataBride" and "WhataGroom," so couples can match all they want, whether they're already married, planning to wed, or just want to live that married life in spirit while they enjoy a burger. 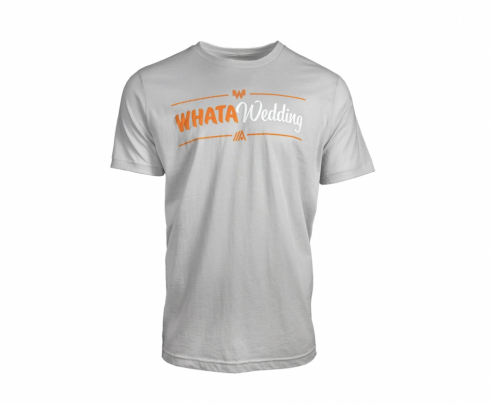 There's that old adage that the bride and groom never eat on their wedding day because they're too busy entertaining aunts and uncles who flew in for the ceremony or trying to manage college friends taking full advantage of the open bar. For those people who might convince their limo driver to stop at WhataBurger before shipping off to their honeymoon, there are "Just Married" table tents, which come either as a standalone or in packs of five.

WhataBurger is one of the most merchandise-heavy fast food chains around, routinely releasing products so popular that people pose as employees to get their hands on them. But they're actually not the first restaurant brand to get in on the wedding merchandise game.

Last year around this time, Dunkin let people actually get married in their drive-thru lanes, and rewarded them with donut cakes and branded treats with "I do" in the Dunkin' colors and font, and gave lucky couples $500 worth of treats and branded merchandise. In 2018, Taco Bell launched a wedding merch line similar to WhataBurger's.

As far as we know, WhataBurger isn't bringing in notaries to file marriage certificates, or bringing in ministers to legally marry anyone in the restaurants. But you never know what the future might bring. When a burger chain can make a line of fishing apparel a success, anything is possible.