What's Happening With Promotional Pens in 2020

“People have been using writing instruments for over 6,000 years, which is evidence that traditional writing practices will continue to stand the test of time,” said Carrie Lewis, marketing and communications manager for BIC Graphic, Clearwater, Fla. “In fact, there are plenty of recent studies that show Millennials, Gen Z and their parents prefer pen and paper.”

So, essentially, if writing instruments haven’t faded yet, they’re not going anywhere anytime soon. Even with all the technology available in 2020, writing instruments are strongly desired and highly used—with or without a stylus. In the retail sector, Persistence Market Research predicted the product category will reach $24 billion by 2025. Meanwhile, in the promotional products industry, writing instruments accounted for more than $1.5 billion of total industry sales in 2018 (third behind only wearables and drinkware), according to PPAI.

“That cost per impression is still really important and helps customers to choose pens, but I also think that people are starting to really enjoy journaling and writing again, and whether it’s using it on their iPad with a stylus or just utilizing it with a journal, people are interested in writing again,” said Trina Bicknell, senior vice president of sales for HPG Brands, Braintree, Conn. 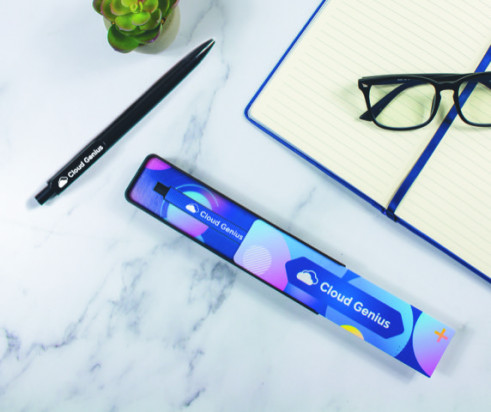 In addition to Lewis and Bicknell, we spoke to RJ Hagel, manager, global marketing for Goldstar, San Diego, and John Lockhead, president of Brand It, a distributor based in Durham, N.C., to find out what to expect for promotional pens in 2020.

In September, tariffs on Chinese goods began to affect the writing instrument product category, Bicknell said. Many promo companies were forced to raise prices as a result of the 15 percent tariff.

“[Distributors] are starting to see it, as of November,” Bicknell said of when the prices went in effect at HPG. “So anything that we had to replace in inventory now is getting that increase because of the tariffs. We tried to not pass [it] on—and only passed on as little as we could to our distributors.”

Distributors, like Lockhead, felt the effects of tariffs last year, too. After starting a project last summer, he faced a tariff price increase by the time the deal was finalized. 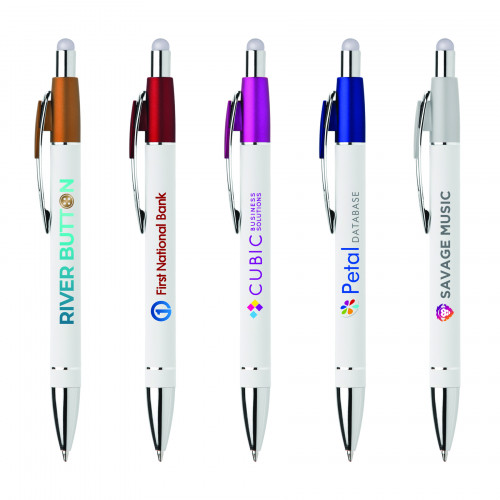 Marquise Softy Brights With Stylus and ColorJet Technology by Goldstar

“I had to—well, I didn’t have to, but I chose to, myself—absorb some of the price increase in my margin,” he said. “Yeah, I’ve certainly noticed it’s had an effect on prices and margins.”

Hagel added that Goldstar—which, along with BIC Graphic, stocks some USA-made writing instruments—negotiated with its overseas vendors to avoid drastic increases on a lot of items, but doesn’t expect to be able to maintain those prices on imported goods through 2020.

“I think there will be a continued rise in prices throughout the next 24 months,” he said. “My feeling is that a lot of companies went and renegotiated. They brought the price down, and [the prices will] continue to rise back up to where they need to be. What I think we’ll see when we come out of this with a lot of tariffs is a demand for refillable writing instruments—higher quality and less quantity [orders].”

Those refillable options have already become a fad over the past few years for Goldstar’s European division due to their eco-friendly status versus their disposable counterparts. That trend, coupled with Hagel’s prediction for where tariffs will drive demand, pushed Goldstar to debut two eco options this year—one made from recycled coffee grounds and another made from wheat.

“Previously, about 10 to 15 years ago, there was a trend toward eco that was more created on a perception of being eco-friendly, but at the sacrifice of quality of product, where typically with writing instruments, you found cardboard pens and other types of products that while perceivably eco-friendly weren’t as functional … and didn’t work quite as well,” he said. “So, what we’re seeing is more sustainable materials coming in a more traditional sense of writing instruments.”

“The ’90s are having a retro pop-culture moment right now and when it comes to writing instruments, gel inks are sparking nostalgia for those milky pens everyone had in middle school,” said Lewis. “Today’s gel inks are much improved, creating thick, opaque strokes that show up well on dark or slick surfaces.”

Hagel added that rubberized soft touch finishes and silver styluses are hot (both can be found on Goldstar’s Marquise Softy), but the supplier is excited to expand its full-color decoration selection to 80 percent of new products this year, as Goldstar has invested in improving production time and eliminating the need for separate screens.

“Traditionally, writing instruments are either silk screen or laser engraved, so you can virtually do unlimited colors without having to have different setup charges, different run charges,” he said. “It simplifies the process by being able to produce quicker and faster with multiple color decoration.”

Bicknell seconded the rubberized pen trend as well as more unique ink options. HPG added a rubberized Javalina and more ink colors to its No. 1 pen line, and UV decoration is especially hot for the rubber pens. But Bicknell also mentioned how HPG’s full-color business has been tripling each year. The new Tabellone Pen incorporates full-color decoration and packaging into its appeal.

“One of the things that we are launching this year is a flat pen that goes inside of a box that you really can’t tell where the pen starts and the box ends,” she said. “It’s almost its own work of art really. So it’s going to be a great gift item and something that, when people see it, I think they’re going to be surprised how new and innovative pens can really be.”

“[Donors] want their donations to go toward the students and faculty, so what is an appropriate donor gift that the donor will use or appreciate and can be seen with? Which is kind of what a lot of our donors’ goals are,” Lockhead said. “That tends to be something like a writing instrument.”

While distributors must be licensed through Learfield Licensing Partners, be an approved distributor at each school and stick to strict brand guidelines, Lockhead has found a lot of success in the vertical and cited the pen as fitting at least eight out of every 10 scenarios for his collegiate clients.

“It’s probably the most widely used promotional product,” he said of pens. “After 20 years of doing this, [I’d say] a pen still works to both recognize a donor in this example and helps the donor to have a tangible product that they can keep with them that I think often is a good opportunity or segway for that donor when their colleague (or their friend or whomever it is) sees them with the pen in their hand. It allows them to explain and tell their story of why they’re passionate about their school. We certainly do a lot of other products, obviously, besides pens, but, oftentimes, the pen meets those criteria.”