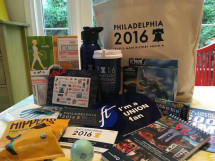 Journalists at the Democratic National Convention received this gift bag. (Image via Cleveland.com)

After the first night of the Democratic National Convention (DNC) in Philadelphia, we saw reports of what journalists attending the event received in their gift bags. (No, they didn't receive Hillary Clinton baggage totes, that was at another event.)

Cleveland.com showcased the full haul that attendees get to go home with, and there are some pretty fun items in there. Here are some of our favorites:

Delegates attending the convention received similar bags, which each included two notepads, a water bottle, pedometers and a DVD copy of "Harry Potter and the Deathly Hallows: Part II." (Because politics is magical, we suppose.)

I should note this is not an item specific to the SC delegation pic.twitter.com/NoHZsXwbGG