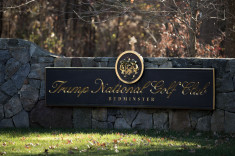 Members of the Trump Administration have been on the receiving end of a merchandise-specific perk of being close to President Trump. Politico reported that White House staffers who have a Secret Service pin that proves they are administration officials receive discounts on merchandise at Trump National Golf Course in Bedminster, N.J. It's the same discount given to members, who pay $350,000 to join.

The discounts reportedly range from 15 percent off any merchandise sold in the clubhouse to 70 percent off of clearance items. These figures were given to Politico by two staffers and proven with receipts.

One source said the idea originally came from Trump's daughter Ivanka, along with President Trump, as a "nice gesture to aides," though White House officials dispute Ivanka's involvement and knowledge of the discount.

While the discounts might seem like a logical and harmless perk for administration officials, some ethics experts aren't so sure, saying the practice muddies the line between the president's office and his business. Virginia Canter, chief ethics counsel at Citizens for Responsibility and Ethics, called the practice "absolutely wrong."

The president has directed his aides to pick up Trump-branded merchandise when he invites Republican lawmakers to the course, though it's not clear whether he later paid for it.

"It does have an effect on how Trump tries to secure personal loyalty and woo people away from what should be their primary and their only loyalty—to the Constitution, to public service and to the people of the United States," Norm Eisen, former ethics czar during the Barack Obama presidency, told Politico. "This is another small inducement, apparently contrary to federal law, that he uses to bind his staff to him personally."

Being that the resort is one of three official presidential residencies, along with Trump Tower in Manhattan and the Mar-a-Lago resort in Florida, it's common for the president and his aides to spend time there.