Why On Earth Did Under Armour Patent a One-armed Jacket? 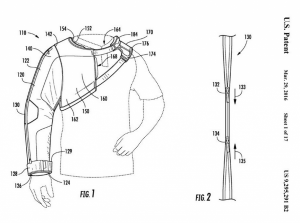 A depiction of Under Armour's patented "arm warmer." (Image via Bloomberg, U.S. Patent and Trademark Office)

It all comes down to pitching.

On March 29, Under Armour was granted a patent for an “arm warmer,” which looks like a one-armed jacket in drawings filed with the original application two years ago, Bloomberg reported.

The jacket is designed for pitchers to help keep their arms warm and loose while their teammates bat. Even in the summer heat, pitchers typically wear jackets or wrap their arms in towels to stay loose—even when this additional heat makes them uncomfortable.

Made with Under Armour’s synthetic sweat-evaporating material, this jacket would allow a pitcher to have his other arm free and to avoid sweating, which is detrimental to pitchers. It also would include adjustable vents for temperature control.

“Sweat has an adverse effect on gripped a baseball, and is undesirable for the pitcher,” Under Armour wrote in a filing with the U.S. Patent and Trademark Office, according to The Baltimore Sun.

That said, companies file for many patents, and receiving one doesn’t mean the invention will be used. As Bloomberg explained, in the past two years, Under Armour has been granted 41 patents in the U.S. The Baltimore Sun listed some of the company’s trademarks, including Gameday Armour, Baby Armour and ArmourBlock.