Why Wasn't There Any WNBA Championship Gear for Sale?

The Washington Mystics defeated the Connecticut Sun to win the 2019 WNBA Finals this year, marking the 21-year-old franchise's first title. Mystics fans could immediately commemorate the occasion by buying Mystics championship gear at the Entertainment and Sports Arena, but aside from that, championship hats, T-shirts and other merch was surprisingly hard to come by.

In just about every other major sport in the U.S., printers are on standby during championship games or potential series-ending games to mass produce apparel and other merchandise at the 11th hour. You've probably seen countless commercials advertising these products during the first commercial break following the game. (Maybe you even work on some of those projects!) That wasn't the case for the WNBA. 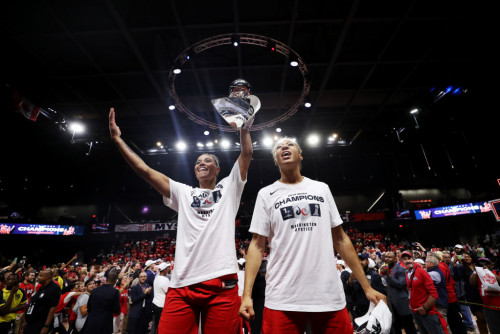 Mystics fans watching on TV had no way to buy these WNBA champions shirts. | Credit: Getty Images by Rob Carr

D.C.-area sporting goods stores like Modells and Dick's had stocked shelves with Washington Capitals Stanley Cup merchandise the morning after their historic win, but local stores told WTOP that they didn't have any immediate lans to sell Mystics championship merchandise following their win.

The team had stuff on-site for the players to wear on the court and for fans in attendance, so why didn't they produce more for fans who couldn't be there?

Serious question, Ted. What needs to be done to make morning-after gear available for longtime and bandwagon fans who aren't at the arena? https://t.co/ldTGP3S1Yb

"It's a shame that sports such as women's basketball are viewed in such a light that fans don't have immediate access to championship gear," Steve Winter, president of Brotman/Winter/Fried Communications, a marketing agency that works in sports and entertainment, told WTOP. "It's an issue that's faced by all sports teams that are considered 'second tier'—lacrosse, minor league baseball, even to some extent professional soccer. Mystics fans should be able to wear—proudly—their WNBA championship swag."

D.C. is obviously a pretty big transplant city, so residents' allegiances vary. That's why you see people pretending to have cared about the Nationals since they were the Montreal Expos right now, or pretending the Washington Redskins deliver a product worth the price of an NFL game ticket. That doesn't cover the fact that sporting goods stores and merchandise and apparel companies haven't made any significant push to celebrate the Mystics' championship. It likely comes down to what Winter said above. If teams and retailers don't think the demand is there, they aren't going to invest in championship merchandise on a larger scale.