Will Amazon Conquer the Apparel World? 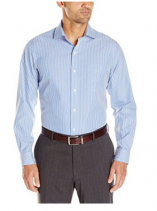 Amazon is looking to shakeup the apparel world with its Buttoned Down apparel line. (Image via Amazon)

Amazon quickly is becoming more than just an e-commerce empire. Just this week, it announced its plans to open Amazon Go, a cashier-less convenience store. Amazon also revealed that it plans to open dozens of small retail storefronts to showcase its hardware devices. But apparently, that's just the tip of the iceberg.

According to Investor's Business Daily, apparel could be Amazon's next major growth opportunity. On Tuesday, the company showcased a line of private-label dress shirts for men. Buttoned Down, Amazon's private-label shirt brand, will be available to members of Amazon Prime only. The price point will start at $39.99. Eventually, Amazon will produce dress pants, sport shirts and sweaters.

While this might not seem as ground-breaking as the cashier-free grocery store, analysts believe this could be huge for Amazon.

"We think that the attractive pricing of the men's dress shirts may serve as a compelling incentive for a Prime membership," said a research note from Pacific Crest Securities, an investment bank, according to Investor's Business Daily. "Second, we think the launch shows that Amazon is interested in using private label to fill in areas of apparel that lack strong, national, wholesale-focused brands."

But, is it enough to have an appealing price point and exclusivity? For Pacific Crest, it goes further than that. Amazon would be entering the $400 billion apparel industry with "disruptive distribution" and "business-model changes." In short, all roads lead to profit.

In terms of the reasoning behind Amazon's new shirt, it seems the site is looking to amp up its younger, male user base.

“At Amazon, we’re always looking to make high-quality apparel more accessible for our guys,” said Warren Satchell, men’s fashion editor at Amazon Fashion, according to PYMNTS.com. “Buttoned Down is a no-fuss, reliable option that guarantees effortless style and great value.”

At an under $50.00 price point, this should be an appealing reason to sign up for Amazon Prime. Plus, it looks like Amazon isn't skimping on quality. Supposedly, the fiber in the shirts is 35 percent longer and 45 percent stronger compared to standard cotton shirts. Plus, the sizing options, such as Big & Tall, classic and fitted, are more vast than standard apparel sizes.

It will be interesting to see if the Amazon apparel lives up to the hype, but for now, keep an eye on the e-commerce giant. The company's track record has proven that it's a powerful force in groceries and services, so apparel could be the next big thing.