Gender-neutral clothing is nothing new. Target recently removed all gendered labeling from its children's clothing, and even the military has taken steps to create more gender-neutral uniforms. School uniforms, however, consistently have remained gender-specific, with boys wearing pants and girls usually wearing skirts.

But this seems to be shifting. According to Mashable, schools across the U.K. are introducing new rules for their uniforms in an effort to reduce bullying. Some schools have removed any references to gender from their policies, while other schools have rewritten the rules to allow students to dress according to the gender with which they identify. The Department for Education has expressed that these rules are not government-mandated, and that these new policies come as a result of a government grant to make schools more LGBTQ inclusive. 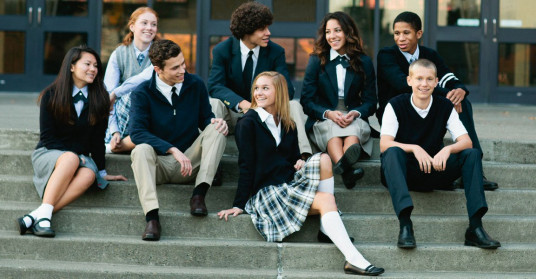 Schools in the U.K. are taking steps to make school uniforms more gender-neutral. (Image via fashiondivadesign.com)

Following the grant, 80 schools in the U.K. have introduced new uniform policies. The Allens Croft Primary School in Birmingham, England, has rewritten its uniform policies to allow boys to wear skirts or pinafores and girls to wear pants.

With such changes happening in the U.K. regarding school uniforms, we wondered if this change would affect the promotional apparel industry. We reached out to Lisa Denham, marketing director for Philadelphia-based Executive Apparel; and Eric Rubin, president of Blue Generation, Long Island City, N.Y., for insight

"The concept of gender-neutral school uniforms to a manufacturer suggests less variety for the customers and perhaps a negative impact on the supplier," she said. "The reality is that, as kids get older and their bodies start changing, they begin to identify with their masculinity or femininity, environmental conditioning begins to affect them and their identities begin forming. At that point, sizing and fit becomes very important to them no matter what they wear. They will find ways to 'alter' their uniform to suit their developing identity, as any school principal will tell you. There will always be enough variety in the garments kids want to wear to satisfy manufacturers."

Denham also acknowledged that the responsibility falls on school administrators to make uniform choices for the well-being of their students.

"Where it becomes tricky is for the school administrators in the current political climate whose job it is to consider the emotional well-being and physical safety of their students," she said. "It may seem like a logical step to choose gender-neutral uniforms to eliminate friction from parents, special interest groups, governing bodies and kids themselves. The question is, can the administrators make uniform choices that respect the identities of their students and satisfy everyone else as well? Their challenge could actually strengthen our industry as we find ourselves in a position to really step up as expert advisers and offer more creative solutions."

For Rubin, the concept of gender-neutral clothing is nothing new in promotional apparel.

"In a way, many uniform programs are already gender-neutral," he said. "Keep in mind that 15 years ago, ladies styles and silhouettes were not even offered in this industry. Women basically had to wear small men’s sizes, and they looked terrible. Hard to believe so much has changed over time. While there is a huge assortment of ladies' styles in the industry today, especially in our Blue Generation line-up, many of the uniform programs are still based on matching styles in men’s and ladies' sizes. Take, for example, a basic polo and khaki pants, a staple in the uniform arena. Other than fit, they look the same. This is especially common in industrial, fast food and service wear sectors of the market. As you move more upscale, the trend leans to more gender-specific in styling."

Rubin also has seen the gender-neutral trend in other areas of the promotional apparel industry.

"Another area [where] gender-neutral clothing is important is the T-shirt business," he said. "Even though we offer men’s and ladies' styles in our tees, many of our customers find it is simpler to hand out 'adult sizes' so they don’t have to deal with both. It is important, however, that the size range offered starts with XS, or even XXS, to fit everyone. So, while the concept of 'gender-neutral' may seem to be new, it has actually been around our industry, more than retail, for a long time."