Will Stamp Books Bring Kids to the Ballpark? 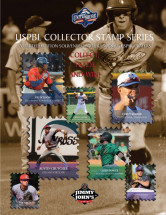 The USPBL will give out stamp books and baseball cards to attract young fans. | Credit: Crain's Detroit

When you, as promotional products professionals, are thinking about a way to appeal to the younger generation, what do you think of? Fidget spinners? Bluetooth speakers? Smartphone accessories? Stamp books?

Wait, what was that last one? Who said stamp books? Do you work for the United Shore Professional Baseball League? Because that's exactly what the independent baseball league is doing to attract younger fans to the ballpark.

Crain's Detroit reported that the Michigan baseball league is also using baseball cards as a sort of throw-back that offers an alternative to the more common promotional giveaways aimed at children.

"It's not Pokemon or stuff on your phone," Andy Appleby, the entrepreneur who financed the USPBL's $16 million stadium in Utica, N.Y., told Crain's Detroit. "But I think kids will like the tangible nature of what we're doing."

Starting this sunday, young fans will receive the cards and stamp books when they attend any USPBL game.

It's funny that he references Pokemon, because the cards do offer a highly collectible opportunity. There will be 26 players on the cards, and every third pack will include a checklist.

The league also will give away 600 stamp books on Sundays, which include stamp sheets with 65 current and former players, and team mascots.

Though the promotion is for children primarily, older fans who appreciate the art of stamp collection will likely be interested, too.

"It's something I wanted to do for 45 years," Appleby said.

This fits into something we've noticed over recent years in the retail space: Everything old is new again. Look at what millennials are getting into right now. Young people are buying vinyl records again, Nintendo is re-releasing its old video game systems, comic book movies are the biggest blockbusters year after year, and everything seems to be made of wood these days.

This is an interesting development for promotional products distributors. What's new isn't always best. Sometimes you have to play the classics.