Will This New Amazon Patent Revolutionize the Apparel Industry?

We've already told you that Amazon is taking drastic steps to shakeup the apparel industry. But the e-commerce giant continues to surprise us, and this new patent could be big.

According to Re/Code, Amazon was awarded a patent for an on-demand manufacturing system that can quickly produce clothing once a customer places an order. The system would consist of textile printers, cutters, an assembly line and cameras to photograph garments for future feedback.

In an effort to increase efficiency, the apparel items would be manufactured in batches based on factors, like customer shipping address

“Once various textile products are printed, cut and assembled according to the orders, they can be processed through a quality check, photographed for placement in an electronic commerce system, shipped to customers and/or stored in a materials handling facility for order fulfillment,” the patent reads, according to Re/Code. “By aggregating orders from various geographic locations and coordinating apparel assembly processes on a large scale, the embodiments provide new ways to increase efficiency in apparel manufacturing.” 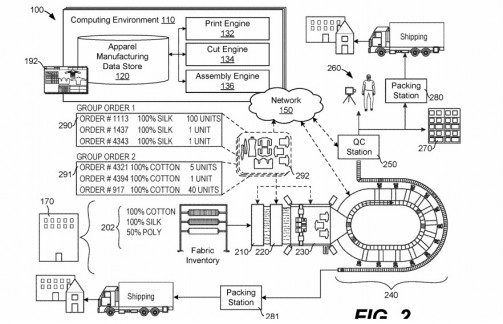 Amazon applied for the patent in 2015, and as of now, there's no word on whether or not Amazon plans to bring this factory into fruition. However, its investors feel this computerized system could work with other categories, such as bedding, footwear, curtains and towels.

If the company manages to build this on-demand apparel facility, it could create a major shift in the apparel industry. With customization growing among end-user demands, this could be the face of what customers want.