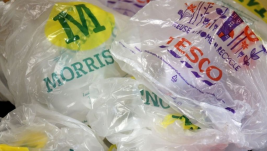 The Wisconsin State Senate may take up a bill this week to strip communities of the power to ban plastic bags. According to the Milwaukee Journal Sentinel, the state assembly already approved the bill by a vote of 63-35.

"Most of the time, government is reactive, and we are trying to be proactive," Sen. Roger Roth, the chief sponsor of the bill that could forbid communities from regulating plastic, paper, cardboard, metal and glass containers, told the Milwaukee Journal Sentinel. "This could be very burdensome."

This move comes after a few cities have taken action against single-use plastic bags. In June, we reported that Honolulul's plastic bag ban came into effect. In August, Chicago stopped using plastic grocery bags in stores.

Bill G. Smith, state director of the Wisconsin chapter of the National Federation of Independent Businesses, told the Milwaukee Journal Sentinel that banning plastic bags and forcing businesses to use sturdier bags would force them to shoulder additional costs.

In 2013, the Eau Claire, Wis., City Council voted on a plan to cut down on use of single-use plastic bags, but the plan currently is on hold.

According to the Milwaukee Journal Sentinel, a study by the U.S. Geological Survey showed that water samples from Wisconsin bodies of water, including streams, rivers and the Milwaukee Harbor, contained pollutants, such as endocrine-disrupting chemicals, which pose risks to developmental, reproductive and immune systems in humans and wildlife. The study indicated that the chemicals can leach from plastic bottles and plastic bags in the water.

However, Roth told the Milwaukee Journal Sentinel that there are environmental reasons to support the use of plastic bags. He reportedly cited statistics from bagtheban.com, which showed that canvas bags must be used at least 131 times before its carbon footprint is less than that of a normal plastic grocery bag.