The World Series is over, with the Boston Red Sox cruising to a 4-1 series win over the Los Angeles Dodgers. But, honestly, who cares, because we need to talk about the digital vending machines Adidas designed to dispense piles of branded World Series merch and promote a new line of shoes.

According to the company, the prizes will change throughout the game depending on how each game plays out. For example, if Adidas athlete Justin Turner hits a home run, then the vending machine will unlock autographed gear by Turner.

If Kiké Hernandez (another Adidas athlete) makes a diving catch in the outfield, then expect the vending machine to unlock a pair of autographed cleats from the super utility star.

This is incredibly cool! The way the machines update and dispense branded gear in real time adds an interactive element that generates ongoing buzz and keeps fans coming back to see what's new. The enormous touch screen and slick, colorful cabinet design are like magnets for the target audience, generations of sports fans raised on Chuck E. Cheese's and, now, Instagram. Most importantly, there's a baseball-playing hot dog on the side of the machine: 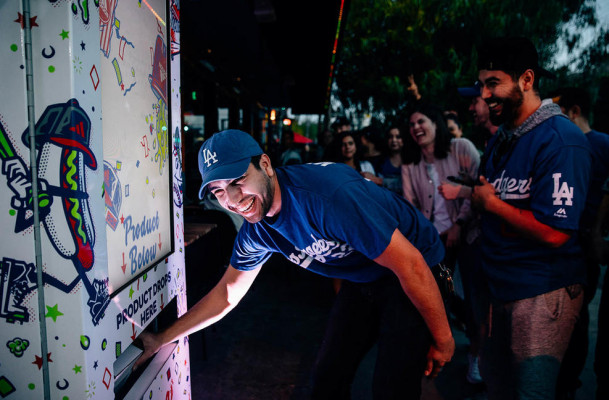 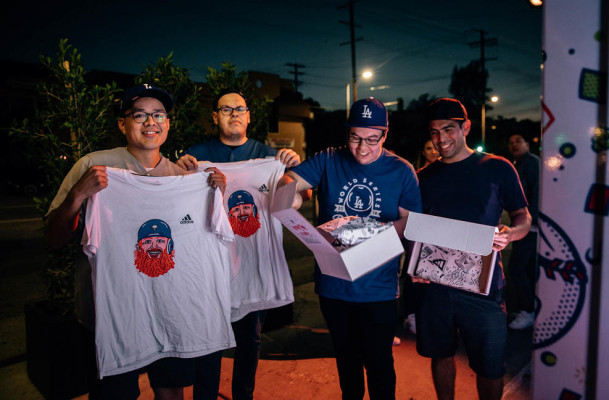 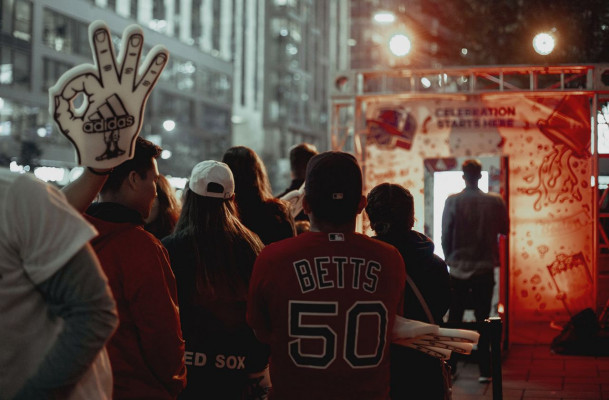 The mix of items is impressive, too. In addition to T-shirts, like the Justin Turner ones seen in the gallery above, there are rally towels, foam fingers, autographed gear and Adidas "Splash Pack" cleats, which the machines were designed mainly to promote. The designs are fun, clean and modern, right on down to the packaging.

Vending machines are enjoying something of a moment in cultural prominence right about now. Uniqlo put one in San Francisco's airport to sell down vests to busy, traveling tech bros. Bud Light installed several branded beer fridges around Cleveland, promising to unlock the sudsy treasures within if the Browns finally won a game. (They did, eventually.) Other brands have used them successfully for promotional purposes.

But few have executed the concept so effectively as Adidas did here. The company worked with Oaken Anchor, a Los Angeles-based event execution agency, on the experiential components, and with Lake Retreat, an agency based in Portland, Ore., on the creative and social strategy. Together, the companies flexed Adidas' licensing muscle, partnering with Major League Baseball to piggyback off of the World Series, a major event in the national spotlight. They placed the vending machines in only two locations—one in Boston and the other in Los Angeles—creating the kind of exclusivity that generates word-of-mouth buzz and gets glossy articles written about it on the internet. They made the whole thing social media friendly, with a brightly lit display and cartoon graphics that are extremely 'grammable.

To celebrate the #WorldSeries, @adidas placed a digital vending machine full of FREE series-themed prizes on each coast. Guess what? You can find one of these “Create a Splash” vending machines at Tony C’s Sports Bar & Grill (1265 Boylston St, Boston). #GoSox #DoDamage pic.twitter.com/Ks9mi5GsQf

Beyond being cool use of existing technology, the vending machines hint at far greater things to come. Imagine, in a few years, a vending machine that not only unlocks new merchandise based on what's happening in the game, but creates it on-demand—essentially, a vending machine with digital printing capabilities built-in. If a player hits a clutch, game-winning home run (or a goose runs onto the field or whatever), the machine could print up a design on the spot, or at least as fast as a designer could create one and upload it. The printing tech is already available, and widely used, even in a similar capacity. It'd just be a matter of shrinking it to fit into a vending machine.

It's not possible yet, but it's fun to think about. For now, let's just appreciate what Adidas did here. The whole thing was an experience, with promotional products front and center. If you're reading this, you already know how effective that is. After this, it's likely other folks will take notice, too. That's a win for everybody.