We here at Promo Marketing love hearing about big deals no matter whether they are the kind that yields financial windfall for companies, especially those within the promotional products industry, or are the sort that makes life on this third rock from the sun even more amazing thanks to their ingenuity. While the former variety helps us help our peers to increase their liquid assets, the latter type compels us today, as an actual fluid has made waves. Relying on tailors and volunteers, India’s Plastindia Foundation converted 200,000 plastic water bottles into a T-shirt that won distinction from Guinness World Records. (It was news to us to learn that the reference text dropped its initial name, The Guinness Book of World Records, 18 years ago.). 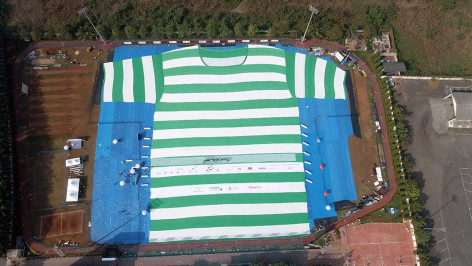 Such aquatic containers have long faced backlash and stand as one of the global community’s biggest nuisances. Given it status as the world’s second-most populous country, India finds the bottles particularly vexing, so the Mumbai-situated entity had not only sustainability but also creativity (not to mention altruism—a bit on that later) on its mind when seeking to fashion the shirt. In a record-setting example of “Waste not, want not,” it enlisted the aforementioned individuals over a 45-day span, with the figures—after Plastindia had crushed, recycled and processed the bottles into fiber that yielded 8,818 pounds of cloth—producing a top that measured almost 318 ft. long and nearly 229 ft. wide.

Adjudicator Swapnil Dangarikar gladly confirmed that the Plastindia-led personnel bested the previous mark by 12 feet length-wise and 23 feet width-wise. Making our bones by often addressing logos, we could not help but think how extra fascinating the T-shirt would have proven had someone applied some sort of emblem or insignia on it. While that thought might not have crossed their minds at all, the Plastindia folks did ponder what to do with the elements of their notable creation, turning it over to have it converted into tops for disadvantaged local children.

Thanks to those 10,000 apparel items, a common troublemaker became a much-needed resource, with Plastindia’s Atul Kanuga, who chairs its environment and plastics image committee, lauding Guinness for giving him and his allies the chance to endow youths with “one moment of significant happiness.”

In becoming the latest company to enter the record books by repurposing plastic bottles, Plastindia reminds us that one person’s waste could end up being a part of another individual’s desire to meet basic needs, with Guinness certainly welcoming other brands to try their hands at being record-making innovators. With regards to Plastindia, we are happy that its ideas to be a pioneer held water.