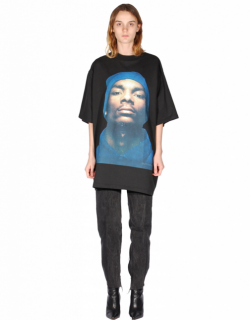 Vetements, one of the most talked about labels in the fashion industry, is selling an oversized T-shirt featuring a photograph of Snoop Dogg from a Vibe cover shoot by Dan Winters in 1993 for $924, Complex reported.

According to Twitter user @Fourty8XL, the shirt is very similar to the “Beware of Dogg” promotional T-shirt from 1993 by Death Row Merchandise Inc.

Left is a Beware of Dogg promo tee from 1993 by Death Row Merchandise Inc. Right is Vetements from Riccardi Boston. pic.twitter.com/a1fzXQcMNY

So, why the hefty price point for a shirt that’s not all that original to begin with? Licensing.

A writer for Riccardi Boston, one of the stores selling the $924 T-shirt, explained via Twitter that Vetements’ designer, Demna Gvasalia, has to pay for licensing in order to use any image or logo on a garment, which leads to a higher price tag.

The price shouldn’t come as that big a shock, though. This is the same brand that has sold a “Yellow DHL T-shirt” for $330, a “Black Oversized Titanic Hoodie” for $885, and a “Multicolor Star Wars Printed Cotton Canvas Skirt” for $1,695. Not to mention (odd) finger gloves.

(And we thought paying $120 for a plain white T-shirt from Kanye West was overcharging.)

Whether you chalk it up to licensing, luxury or, well, brand name, outrageous pricing for basic apparel is what we’ve come to expect from the brand.

The shirt still is on pre-order, but those looking to shell out $924 for it should act fast. Vetements’ apparel tends to move quickly and, as Complex reported, doesn’t get restocked after it goes to the showroom.